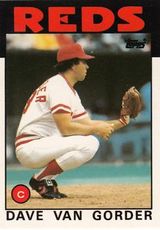 Dave Van Gorder was drafted by the Cincinnati Reds in the 2nd round of the 1978 amateur draft on June 6, 1978. Dave spent his first season in pro baseball with the Nashville Sounds where he appeared in 73 games and hit .263. He then spent the next four years in the minors with Nashville and the Indianapolis Indians before getting a chance at the majors.

In 1986 he spent 9 games with the Reds, did not hit a lick, and they sent him to the AAA Denver Zephyrs, where he caught 66 games but hit only .228. The Reds released him on November 11th and he signed as a free agent with the Baltimore Orioles. They used Dave for 12 games and 21 at bats with 5 hits for a .238 average in 1987 and sent him to the International League's Rochester Red Wings where he appeared in 22 games but hit only .136. It was all over. He was granted free agency on October 15th but there were no takers.

The good thing about Van Gorder is he was an excellent receiver, his career fielding percentage came to an excellent .990. Dave spent 10 seasons in professional baseball from 1978 through 1987.