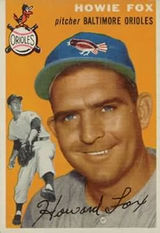 In 1943, Howie Fox was attending the University of Oregon when he was signed to a professional baseball contact by the Cincinnati Reds. He was sent to the Birmingham Barons of the Southern Association where his first year saw him winning 14 games while losing 17. In 42 games, he pitched 205 innings, winding up with a 4.83 ERA.

Fox was back with the Barons in 1944 and improved his record to 19 wins and 10 losses in 252 innings pitched for a solid 2.71 ERA. He was called up to the Reds in late September of 1944 and appeared in two games with no decisions.

1945 saw Howie spend the entire year with the Cincinnati club, winning 8 and losing 13 in 164 innings. His ERA was 4.93. In 1946, he made brief appearances in four games before the Reds shipped him to the AAA Syracuse Chiefs of the International League. Howie spun a 4-1 record for the Syracuse Team in 51 innings, coming up with a 3.71 ERA.

In December 1951, he was sent to the Philadelphia Phillies, along with second baseman Connie Ryan and catcher Smoky Burgess for Eddie Pellagrini, Dick Sisler, Niles Jordan and catcher Andy Seminick. For the Phillies in 1952, Fox had 2 wins against 7 losses in 62 innings and his ERA ballooned to 5.08. 1953 found him back in the International League with the AAA Baltimore Orioles where he had an excellent season, winning 15 games against 10 losses in 204 innings for a 3.84 ERA.

His last season in the Major Leagues came in 1954 with the now American League Baltimore Orioles. Fox did get in 38 appearances, winning one and losing 2. It was his last in the big leagues.

Fox was on the professional baseball pitcher's mound from 1943 through 1955. His combined pitching totals for those years, both Major League and Minor League showed him with 117 wins against 127 losses. He pitched 2,149 innings in 429 outings, giving up 2,192 hits for a 3.97 ERA.

After baseball, Fox opened up his own tavern in San Antonio and was present when three men entered the bar and started making trouble with the bartender. Fox, in trying to stop the trouble, was killed by a knife wound from one of the thugs on October 9, 1955.