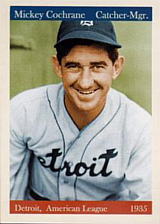 Inducted into Hall of Fame in 1947

"Cochrane's arrival in Detroit coincided roughly with the revival of the automobile industry and the first signs of revived prosperity. His determined jolly face soon came to represent the picture of what a dynamic Detroiter ought to look like." - Time Magazine, October 7, 1935

"Lose a one to nothing game and you didn't want to be in the clubhouse with Grove and Cochrane. You'd be ducking stools and gloves and bats and whatever else could fly." - Doc Cramer 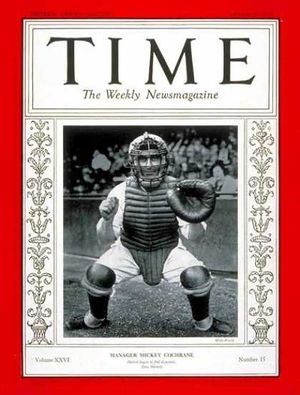 Cochrane on the cover of Time in 1935

Hall of Fame catcher Mickey Cochrane chose baseball glory over basketball and football, becoming one of the all-time greats in history in the process. A two-time Most Valuable Player and three-time World Series champion, Cochrane was nicknamed "Black Mike" for his famous competitiveness and temper. His career ended abruptly due to a beaning sustained in 1937.

A Boston University star, Mickey played quarterback, punter and running back for the Terriers football team. He could just have easily gone on to gridiron glory, but with the NFL in its infancy and baseball leagues far more established, it was baseball he entered. Mickey joined the Dover Senators of the Eastern Shore League in 1923, hitting .322 with 5 home runs in 65 games. He spent the next season in the Pacific Coast League with the Portland Beavers, batting .333 with 7 homers and 56 RBI in 99 games. When he came up from the minors to the Philadelphia Athletics at the start of the 1925 season, he was a poor defensive catcher with a robust bat. He learned at the knee of Cy Perkins, the incumbent on the scene. One day, early in the season, when Cochrane rapped a pinch hit to win the game, Perkins was heard to remark, "There goes Cy Perkins's job."

Mickey was a rarity for a catcher, allowed by Connie Mack to bat leadoff with his hitting acumen and his ability to run far better than the average catcher. Cochrane was tasked with getting on base so fellow future Hall of Fame boppers Jimmie Foxx and Al Simmons could drive him in. Cochrane's bat had plenty of pop as well: just one month into his career, he belted three home runs in a 20-4 steamrolling of the St. Louis Browns. He finished his rookie season with a .331/.397/.448 line in 134 games. At the dawn of his sophomore season, there was already talk he was the best catcher in all of baseball. He tapered off somewhat in 1926 (.273/.369/.408), then re-arrived in 1927 with a .338/.409/.495 line, belting 12 home runs and scoring 80 runs. In 1928, he won his first American League Most Valuable Player Award, hitting .293/.395/.464 with 12 triples, 10 home runs and 92 runs scored, leading the AL in putouts. It was a reward not just for his exemplary play, but his leadership, routinely handling a strong pitching staff that included ace Lefty Grove.

In December 1933, Cochrane was traded to the Detroit Tigers. Upon his arrival, he was installed as the club's player-manager for 1934. In his first year, he led the team to the AL pennant, while also batting .320/.428/.412 in 129 games, and won the AL MVP for the second time. In 1935, his final 100-plus games season (.319/.452/.450 in 115 games), the Tigers won the World Series, defeating the Chicago Cubs. In 1936, he was having a typically fine season (.270/.465/.381) when he suffered a nervous breakdown in June. He returned to the lineup in August, but played just 5 more games that year. The Tigers no doubt missed Cochrane in the batting order (his backups hit terribly), but perhaps more so behind the plate, as the staff ERA rose to 5.00 from 3.82 and the team finished a distant second. On May 25, 1937, his playing career came to an abrupt end when his skull was fractured by a pitch thrown by Bump Hadley of the New York Yankees. Cochrane had been hitting well as usual at the time of the injury, hitting .306/.452/.490 with 27 runs scored in 27 games, having gone 10-for-17 in his last 4 contests. After being unconscious for ten days, he recovered enough to return as manager later in the season, but had to take another break. He was the Tigers' manager at the start of the 1938 season, but never played again.

Bill James ranks Cochrane as the 4th best catcher of all-time and the 72nd best player in the second edition of the Bill James Historical Abstract. He is also highlighted in Heroes Behind the Mask as one of the top catchers of all-time. He batted .320/.419/.478 in 1,482 games, surpassed in batting average only by Joe Mauer, catching-wise. Additionally, he batted for the cycle twice, doing so on July 22, 1932 against the Washington Senators and August 2, 1933 against the New York Yankees. In 1947, he became only the third catcher to join the Hall of Fame, later being honored among the Detroit Tigers retired numbers and the Philadelphia Baseball Wall of Fame.

Later in life, Cochrane spent time as General Manager of the Athletics, a scout for the Yankees and Tigers, and a coach for the Athletics in 1950. His brother, Archie Cochrane, was a minor league player and owner. Away from the diamond, Cochrane was a lieutenant in World War II; he entered military service in 1942 with the US Navy and managed the Service All-Stars at Cleveland on July 7, 1942. He managed the Great Lakes team from 1942 to 1944, then went to Gab Gab Beach, Guam to head the fleet recreational center. He later owned an automobile business, passing away at 59 from lymphatic cancer in 1962.