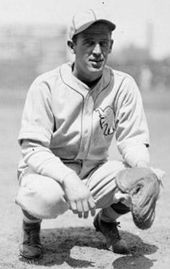 Catcher Cy Perkins had a seventeen-year career in the majors, with fifteen seasons on the Philadelphia Athletics squad. He must have ranked high in Connie Mack's estimation, since Mack, a former catcher himself, was the manager for all fifteen years.

Like many players nicknamed "Cy", his real name was not Cyrus. It was Ralph.

The near 47-year-old Perkins entered the Navy in November 1942 and was discharged in 1944.

He became a coach for several champion teams - the 1932 New York Yankees, the 1935 Detroit Tigers, and the 1950 Philadelphia Phillies. He briefly managed (15 games) in the majors in 1937 after Cochrane suffered a fractured skull.