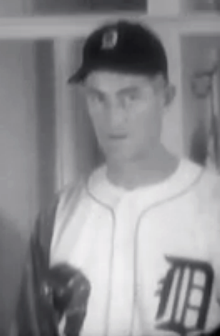 "I know pitchers who, when they throw a curve, bite the lip or stick out the tongue." - Del Baker

Catcher Del Baker saw limited playing time in three years in the majors but spent many years in the Detroit Tigers organization as a player, manager and coach. He began his playing career in 1911 and played in the bigs with the Tigers from 1914 to 1916, serving as a backup backstop to Oscar Stanage. He then returned to the minors and, with the exception of 1918 when he was serving in the military during World War I, played until 1932.

After his playing days, Baker became a Tigers coach in 1933. He managed the team for portions of the 1933, 1936, and 1937 seasons before becoming skipper for good midway through the 1938 season, replacing Mickey Cochrane. He led the club to the 1940 World Series, which they lost in seven games to the Cincinnati Reds and remained manager through the 1942 season. Baker was then a Cleveland Indians coach in 1943 and 1944 before joining the Boston Red Sox staff. He was a Boston coach from 1945 to 1948 and again from 1953 to 1960, serving as the Red Sox interim manager for seven games in his final season with the club. In between Red Sox coaching stints, he managed in the Pacific Coast League from 1949 to 1951. Baker was famous for his ability to "read" the opposing pitcher, and would tip off batters as to what kind of pitch was coming.