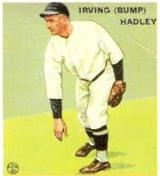 Bump Hadley won 161 games in the big leagues, and appeared in three World Series. After baseball, he was an early television sportscaster.

While playing for the New York Yankees in 1937, Hadley threw a pitch that struck Mickey Cochrane, leaving him unconscious for ten days and ending his playing career.