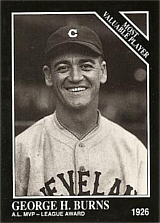 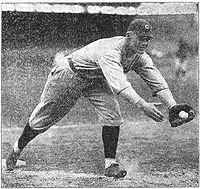 First baseman "Tioga" George Burns is not to be confused with the other George Burns, the contemporary left field who played in the National League. In a career spent entirely in the American League, "Tioga" George racked up 2,000 hits and was named MVP in 1926.

Burns reached the bigs with the Detroit Tigers in 1914, leading the AL in HBP (12) his rookie year and playing a fair amount of games his first few seasons without distinction. According to Bill James in the Historical Baseball Abstract, he endured a wild three-year stretch during the rest of his Tiger tenure (1915-1917) which included a bout of malaria, a bout of typhoid fever, an appendectomy, a broken ankle and a broken shoulder blade from diving into a swimming pool. Connie Mack came a-courting, working out a deal in which Detroit sold him to the New York Yankees, then flipped him to his A's for Ping Bodie. Burns excelled in 1918, leading the AL in hits (178) and HBP (8) while slashing .352/.390/.467 and finishing just behind Ty Cobb in the batting race. This still was not enough to distinguish him as making the grade. During the 1920 season, he was flipped to the Cleveland Indians for $10,000.

George came through in the World Series with his new 'mates, working as a platoon player at first base. He doubled home Tris Speaker in Game 6 to provide the only run the Indians needed in a 1-0 win over the Brooklyn Robins; the Indians seized their first World Series title the next day. In limited duty, he hit .361 in 1921 but was once again peddled, this time in a multi-man deal with the Boston Red Sox. Following two seasons at Fenway Park playing for the Boston Red Sox, during which he swatted a personal best 12 home runs in 1922, it was back to Cleveland in another multiplayer arrangement in January 1924. Perhaps the Indians were impressed with the unassisted triple play he turned against them, with Frank Brower at the bat, back on September 14, 1923. Brower lined a shot to Burns, who stole a base hit, then tagged baserunners Rube Lutzke and Riggs Stephenson re-tracing their steps to close the Indians' half of the 2nd inning.

Burns enjoyed a solid first two seasons back with Cleveland. During the first, on June 19, 1924, in the first game of a doubleheader against his old pals, the Tigers, George went 6-for-6 with 3 doubles and a triple, leading the charge in a 16-5 drubbing. It was in 1926 that he enjoyed his season to end all seasons. He earned MVP honors by obliterating many of his personal bests, hitting .358/.394/.494 while leading the league in hits (216), scoring 97 runs and driving in 115. He also established a new AL single-season record with 64 doubles, to be broken by Earl Webb in 1931. Following another solid season in 1927, hitting .319 with 51 more doubles, he became a part-time player, finishing his career with a strikeout against Pat Malone of the Chicago Cubs, earning another ring as a contributor to the A's 1929 world championship. In 1,866 games, he swatted 2,018 hits with a .307/.354/.429 line.

Back to the minor leagues, Tioga George did some player-coaching with the San Francisco Missions (1930-1931), the Seattle Indians (1932-1934) and the Portland Beavers (1934), all within the Pacific Coast League. He worked as a sheriff until his retirement, passing away in Kirkland, WA, at the beginning of 1978.