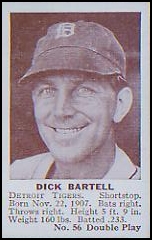 "The Giants had won the pennant in 1936 and were playing the Dodgers in the last game of the season. [Dick] Bartell needed two hits for a .300 average. The first time up he fouled out to Babe Phelps, Dodger catcher. Dick tried to break his bat, he was so mad. The second time up, Max Butcher pitched four balls so far from the plate it looked like an intentional walk, since two men were out and there was none on, and Brooklyn was leading 6 to 0. Some thought it was intentional because the Brooklyns didn't want him to get a hit. In the fifth inning, his third time up, he flied out to left field. Dick figured he'd have two more turns at bat before the game was over. In the seventh inning, Hal Jeffcoat was on the mound for Brooklyn. Cy Pfirman was umpiring behind the plate. The umpire called the first pitch a strike. Bartell turned and said to him, "Watch those, Cy, I'm after a hit today as I've never been before." Pfirman told him to stand up to the plate. The second ball was more off than the first. "Strike two," cried the umpire. "Please, Cy," Dick pleaded. "Bear down." The third pitch came over. "Strike three. You're out." Dick, who thought it was a ball, threw his bat down. He raved and stamped his feet and crowded Pfirman away from the plate. The umpire tried to ignore him, in the time honored manner, by dusting off home plate. Finally, Bartell said too much and Pfirman waved him out of the game. Bartell went mad. He rushed toward the umpire with mayhem in his heart. Jimmy Ripple tried to shove him away. Then Bill Terry and Adolfo Luque joined in trying to calm the raging shortstop. Still, Bartell tried to break away and only gave up when the huge Pancho Snyder came over. Snyder led him away toward the clubhouse." - Jimmy Powers, with a possibly apocryphal story of Bartell's notorious temper, in his 1949 Baseball Personalities book 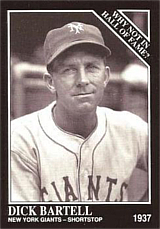 Known for a fiery playing style which earned him the nickname "Rowdy Richard", shortstop Dick Bartell played eighteen seasons in the majors with five different teams. Known as a good hitter and solid fielder, he was a two-time All-Star and played in three World Series.

After graduating from Alameda High School, Bartell began his pro career with the Bridgeport Bears in 1927. By the end of the season, he was in the majors, appearing for the Pittsburgh Pirates in their final game of the year; he would never again play in the minors. Pittsburgh dealt away prospect Joe Cronin prior to the next season, making Bartell the backup to Glenn Wright, and he hit .305 in his first full season in the bigs in 1928. After Wright was traded, Dick became a starter, hitting .302 in 1929 and .320 in 1930. After the 1930 season, he was traded to the Philadelphia Phillies for shortstop Tommy Thevenow and pitcher Claude Willoughby. He continued to excel and was the starting National League shortstop in the first All-Star Game in 1933. After four years in Philly, he was dealt to the New York Giants for four players and cash and went on to have some of his greatest seasons. In the 1936 World Series, he hit .381 as the Giants lost to the New York Yankees. The next year, 1937, he hit .306 and was an All-Star for the second time in his career, but the club again fell to their crosstown rivals in the World Series.

Following a disappointing season with the Chicago Cubs in 1939, Bartell was dealt to the Detroit Tigers for Billy Rogell after the campaign. He hit just .233 for Detroit, but his team reached the World Series, falling to the Cincinnati Reds. He was released after five appearances the next year and then went back to the Giants, for whom he hit .303 the rest of the way in 1941. He remained with New York for two more summers as a utility player. He entered the Navy in April 1944 and was discharged December 1945. Bartell returned to the Giants in 1946, appearing in a pair of games. After two years managing in the minors, he went on to serve on the Tigers staff from 1949 to 1952 and was a Reds coach in 1954 and 1955.

There are two Hall of Famers on Bartell's similarity scores list, with the most similar one being Red Schoendienst (Billy Herman is the other). Bartell died of Alzheimer's disease at age 87.