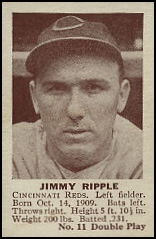 Jimmy Ripple, an outfielder who played seven seasons in the majors, sparkled in World Series play, posting a line of .320/.433/.480 in 50 at-bats in three World Series.

He was only the second player (after Kiki Cuyler) ever to hit World Series home runs for two different teams.

Ripple started in professional baseball in 1929, hitting well in the Middle Atlantic League, and then became a legend in Montreal, playing there from 1929-35 and also in 1940. He hit over .300 in Montreal, reaching .333 in 1935, a year in which Montreal won the pennant.

His major league career ended after a tendon injury, but he played in the minors in Louisville, Seattle, and San Francisco.

He operated a hotel for seven years after retiring from baseball. In 1956 he was elected to the International League Hall of Fame. He had a lengthy illness in 1959.