Inducted into Hall of Fame in 1968

Kiki Cuyler played football for the US Military Academy during World War I then worked at a Buick factory in Flint, MI. When the recession led to a decrease in his hours, he decided to try his hand at pro baseball. He broke into the big leagues in 1921 with the Pittsburgh Pirates, then spent a few years in the minors honing his skills. In 1923, he was the Most Maluable Player of the Southern Association with the Nashville Volunteers. He became a fixture in the Pirates' lineup in 1924, when he hit .354. He would likely had won the Rookie of the Year Award had it existed at the time. The next season, in 1925, he hit .357 with 45 doubles, 26 triples, 18 homers, 102 RBIs, 144 runs scored, and 41 stolen bases and was second in Most Valuable Player voting as the Pirates won the National League pennant. In the World Series against the Washington Senators, he hit a game-winning home run in Game 2, and his two-run double in the 8th inning of Game 7 defeated Walter Johnson and Washington 9 to 7, marking the only time in his career he would be part of a championship team.

Cuyler hit .321 in 1926 and led the NL with 113 runs scored and 35 stolen bases. However, the following year, he clashed with new manager Donie Bush. Bush wanted Cuyler to bat second, but Cuyler felt he was not suited to batting in this spot and refused, so he was benched. Despite hitting .309, he did not play in that year's World Series against the New York Yankees. Following the season, he was traded to the Chicago Cubs for Sparky Adams and Pete Scott.

Cuyler became part of a fearsome Cubs' right-handed quartet which included Hack Wilson, Rogers Hornsby and Riggs Stephenson. He hit .360 with a league-best 43 steals for the Cubs in 1929 as they reached the World Series but lost to the Philadelphia Athletics. The next year, 1930, he hit .355 and led the league again with 37 stolen bases. He hit .291 in 1932 as the Cubs won another pennant but lost the World Series to the Yankees and made the All-Star team in 1934. He later played with the Cincinnati Reds and Brooklyn Dodgers to finish his career. 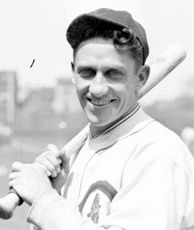 During his career, Cuyler established a reputation as an outstanding hitter with great speed. He batted .300 or higher ten times and finished with a .321 lifetime batting average. He also led the league in stolen bases four times and finished his career with 328 steals. Defensively, he was known for a good arm and his speed in the field.

He wanted to become a major league manager but was passed up for the job by both the Reds and the Dodgers. He decided to go down to the minor leagues as manager for the Chattanooga Lookouts from 1939 to 1941, while still playing occasionally. He also managed the Atlanta Crackers from 1944 to 1948. In between these two stints, he was a Cubs coach from August of 1941 to 1943. He became a member of the Boston Red Sox staff in 1949, after his time in Atlanta, having been recruited by his former manager with the Cubs, Joe McCarthy.

He was known for his clean living at a time when the majority of players were drinkers, his Cubs teammate Hack Wilson prominent among them. He had an excellent signing voice and formed a quartet with teammates Wilson, Gabby Hartnett and Cliff Heathcote, performing in vaudeville shows in the off-season. However, his favorite pastimes were hunting and fishing, especially moose hunting which he practiced in the winter in northern Michigan.

He died in 1950 at the young age of 51, victim of a heart attack caused by thrombosis. This was likely the result of a blood clot stemming from the numerous leg injuries he sustained during his playing career. He was buried in Harrisville, Michigan, his birthplace. Cuyler was inducted posthumously into the Baseball Hall of Fame by the Veterans Committee in 1968.

His name "Kiki" (pronounced "kuy-kuy", rhymes with "eye") was a shortened form for his last name. He gained his nickname as a child, when it was simply "Cuy". In Bill James' Historical Baseball Abstract he (James) mentions that Cuyler was a stutterer, which may explain why the named was doubled.

Cuyler was the first player to hit World Series home runs for two different teams: the Pirates and the Cubs. About twenty players have homered for more than one World Series team since, including Matt Williams who homered for three teams. 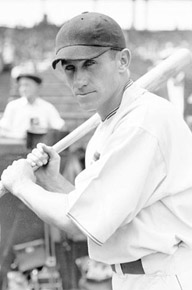 In an episode of the television show Leave It To Beaver, Ward Cleaver mentions to Beaver and Wally that his favorite player from childhood was Kiki Cuyler.

Some or all content from this article is licensed under the GNU Free Documentation License. It uses material from the Wikipedia article "Kiki Cuyler".