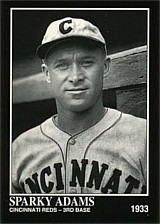 "Branch Rickey first saw him working out at shortstop and jumped to his feet shouting 'Get that bat boy out of the shortstop's position!' 'That's not a bat boy, Mr. Rickey,' said one of his aides. 'That's Earl Adams.' 'Judas Priest!' Rickey exploded. 'Do you mean that is the man we paid seven hundred and fifty dollars for?'" - Lee Allen, from his book The Hot Stove League 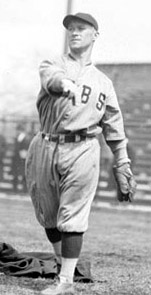 Infielder Sparky Adams played thirteen seasons in the majors and was best known for his defense and speed. According to historian Lee Allen, while he was billed at 5' 5", he was actually closer to 5' 4", making him the shortest player in the National League during his career.

Adams made his big league debut with the Chicago Cubs in September 1922 and split time at shortstop with Charlie Hollocher the next two seasons. He became the team's regular second baseman in 1925 after George Grantham was traded to the Pittsburgh Pirates. He established himself with a .287/.341/.368 line, scoring 95 runs while leading the NL for the first of three straight seasons in at bats. He had two more fine seasons in Chicago, scoring 95 runs while batting .309/.367/.375 in 1926 and scoring a career-high 100 runs in 1927. Adams was traded to the Pittsburgh Pirates for the 1928 season, where he once again replaced Grantham at second. With diminishing returns at the plate, Adams was sold after the 1929 season to the St. Louis Cardinals, who won National League pennants in his first two seasons. In 1930, Sparky hit .314/.365/.409, while he led the NL with 46 doubles in 1931, finishing 9th in MVP voting. He suffered a knee injury in 1932 that led to his retirement in 1934 after a season and a half with the Cincinnati Reds.

During his career, Adams scored more than 90 runs six times and stole more than 20 bases on four occasions. Perhaps due to his small stature, he had little power, hitting just 9 homers in his career (7 of them between 1923 and 1925) and going five consecutive seasons with none. Defensively, he led the NL in fielding three times, once at second base and twice at third.

After his major league career ended in 1934, he played one more year in the minor leagues and then returned to his home area, where he owned and operated a service station in Schuylkill County, PA, until his retirement.