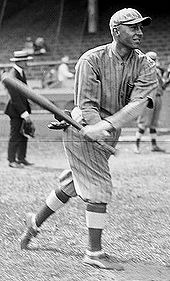 Shortstop Charlie Hollocher burst onto the major league scene with the Chicago Cubs in 1918. Hollocher led the National League that year in at-bats, hits, total bases, and singles. Based on his play Hollocher was chosen as shortstop for the Baseball Magazine All American Baseball Club in 1918.

A contact hitter, Hollocher struck out only 5 times in 592 at-bats in 1922, the best at-bat-to-strikeout percentage in the National League in the 20th and 21st centuries. Although he had only 5 strikeouts, he managed to walk 58 times, his career high.

Hollocher was an above average batsman with a career batting average of .304 to go along with fine fielding, twice leading NL shortstops in fielding percentage. Mysterious abdominal pains cut his career short, though. Sixty-six games into the 1923 season, he left the Chicago Cubs to go home and rest. He returned for 1924 but retired after 76 games.

He ended up working odd jobs such as tavern manager, security guard, and newspaper delivery. The abdominal pains became too much to bear shortly after his 44th birthday and he committed suicide.