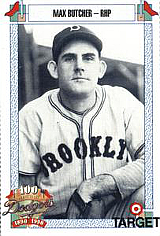 "In Brooklyn, we had Max Butcher. A pretty fair pitcher, Max's eyes were always blinking and the guys used to say that he pitched between blinks. In 1937, Burleigh Grimes was managing the club. We were playing an exhibition game and Burleigh was coaching first base. The steal sign was when he winked at us. 'When I wink, you go,' he said. Then in the middle of the game he gets a long distance phone call and has to leave the field. They put Max in to coach first base. Gibby Brack gets on. Gibby, Lord rest his soul, wasn't the brightest guy in the world. He looks at Max. Max's eyes are blinking away and Gibby lights out for second. He's shot down by about fifteen feet, just as Grimes is coming back. Burleigh starts roaring 'Who gave that steal sign?' And somebody said 'Nobody gave it, but look who's coaching first base.' And there's big Max Butcher standing there, blinking away." - Buddy Hassett, to Donald Honig, from the book Baseball Between The Lines

West Virginia native Max Butcher spent sixteen seasons in professional baseball from 1931 to 1946. The right-hander started his pro career with five seasons in the minor leagues from 1931 to 1935. He put together a 60-49 record during this run, with his best year coming in 1935 for the Galveston Buccaneers of the Class A Texas League. Butcher's 24 wins in 39 games tied him for the league lead and put him on the All-Star team. He also had a 2.21 ERA while pitching 317 innings.