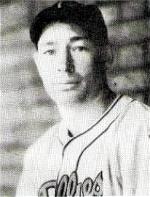 Gibby Brack, who came to the majors at age 29, played three seasons in the big leagues and was an above average hitter. He had a 12-game hitting streak in the first two weeks of his career with the Brooklyn Dodgers in 1937. While reports at the time said he was 24, he was in fact a full five years older, which partly explains why he did not do much after a successful rookie season. Gibby played for the Montreal Royals in 1943.

After baseball, he was a longtime steelworker. When he committed suicide by gunshot in 1960, he was unemployed and his wife was seriously ill, according to his obituary.