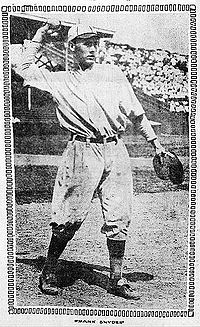 Frank "Pancho" Snyder had a distinguished career as a major league catcher. The JAWS method of rating catchers puts him in the top 100 of all time. Frank was also a New York Giants coach from 1933 to 1941.

His entire 16-year big league career was with two teams - the St. Louis Cardinals and the Giants. Although 8 1/2 of his seasons were with the Cardinals, all four of his World Series appearances came with the Giants.

Frank was born, and died, in San Antonio, TX. His nickname was Pancho, and he was of Mexican heritage on his mother's side of the family (per Wikipedia, citing the Bill James Historical Baseball Abstract as authority).

As a youngster, he played in the minors for the Flint Vehicles and the Springfield Reapers while coming to the majors for cups of coffee at ages 18 and 19 with the Cardinals in 1912 and 1913. He stuck in the majors for good at age 20, one year before the young Rogers Hornsby broke in with the same team. Snyder's best year with the bat was in 1915, when he hit .298 in the dead ball era, highest among team regulars on the Cardinals. Frank stayed with the Cardinals through half of 1919, and was then traded in mid-season to the Giants.

Frank was selected off waivers late in the 1926 season by the Cardinals, and played his last big league season with them in 1927. In all, he had 16 years in the majors.

He continued to play minor league ball, primarily as a player-manager, and managed eight years in the minors. He was a major league coach, from 1933 to 1941, as mentioned above, and also worked for a brewery late in life.