The 1902 Philadelphia Athletics had a very agitated season on their way to winning the American League pennant. They were originally largely stocked with defectors from the National League's Philadelphia Phillies, but the Phillies were successful in obtaining an injunction from the Pennsylvania Supreme Court that prevented six players from playing for any team other than the Phillies. The injunction only applied in the state of Pennsylvania, but as a result Bill Duggleby and Chick Fraser returned to the Phillies, and the A's had to deal away the others, as they could not play for them. As a result, three of their best players, Napoleon Lajoie, Elmer Flick and Bill Bernhard ended up with the Cleveland Bronchos. However there was an upside to this, as all of the players affected were prevented from playing any road games in Philadelphia, PA. This not only affected the players who had defected to the Athletics, but other stars such as Ed Delahanty, Red Donahue, Al Orth, Happy Townsend and Ed McFarland. Thus, the A's often faced depleted opposition when playing at home and had a .767 winning percentage at home, compared to playing well below .500 on the road, one of the greatest such disparities of all time.

They also added a couple of players who turned out to be big stars in their own right. On July 7th, they purchased 2B Danny Murphy from the Norwich Reds of the Connecticut State League, and he proved to be a huge upgrade over Lou Castro, hitting .313 the rest of the way. Even more important was signing P Rube Waddell from the Los Angeles Loo Loos of the California League in late June; he went 24-7 the rest of the way, and was arguably the best pitcher in the league during that span. Eddie Plank also turned things around, starting 6-13, before winning 14 of his final 16 decisions. Thus, the A's how had been 27-26 at the end of June, ended the season in first place, 30 games above .500. 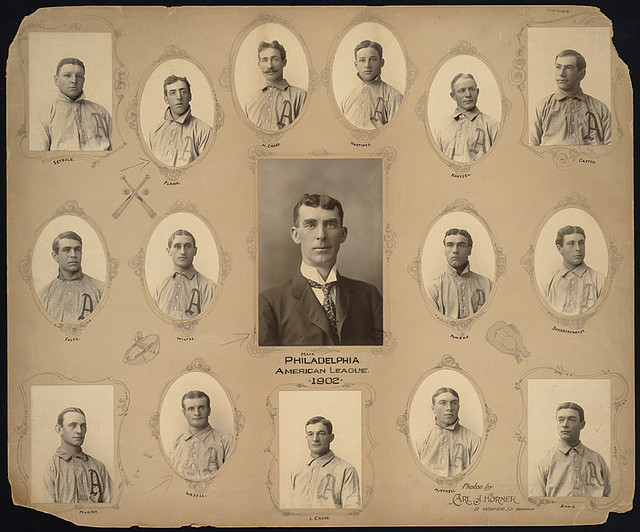