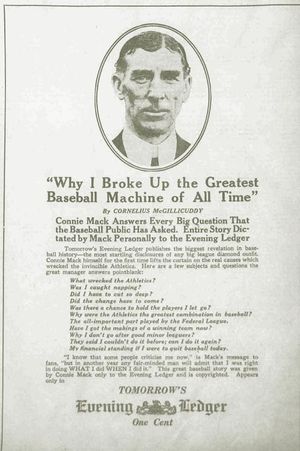 Connie Mack explaining himself to the public.

The 1915 Philadelphia Athletics were the stripped-down team after Connie Mack got rid of many of the 1914 stars. The team had won the pennant in 1913 and 1914, but would finish eighth in the American League for years to come beginning in 1915. The team would not become competitive again until 1925, and would not win another pennant until 1929.

The Philadelphia Evening Ledger had a front-page interview with Connie Mack, attempting to explain his decision and to appease the public. "'I broke up the Athletics to prevent baseball ruin,' declares Connie Mack" read the headline. "I'll Have Another Top-Notch Aggregation Within Two Years". See this link for the complete story.

56 players was a record for players used by a team in a season. The 1996 Boston Red Sox tied that, and then the 2000 San Diego Padres used 57. That total has since been passed a number of times. However, the 24 different starting pitchers used by the Athletics remains the all-time record. That is in spite of the team's top three starters being fairly active, with Weldon Wyckoff making 34 starts, Rube Bressler 20, and Joe Bush 18. However, at the back end, 10 different pitchers made just one start.