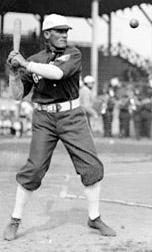 Catcher Ed McFarland played fourteen years in the majors, mostly with the Philadelphia Phillies and the Chicago White Sox. Above average in both hitting and fielding, his best year with the bat was 1899 when he hit .333 with the Phillies. Late in his career, he was part of the White Sox team that won the 1906 World Series.

McFarland, born in Cleveland, OH, broke in at age 19 with the Cleveland Spiders in 1893. Three years later, in 1896, he became the regular catcher for the St. Louis Browns which had five managers.

He played in 1894 with the Toledo White Stockings of the Western League, hitting .389 and slugging .661. He umpired two National League games in 1896.

Ed is one of six major leaguers (through 2007) with the last name McFarland, most of whom played around 1900.

The most similar catcher (according to the similarity scores method) is contemporary Ossee Schreckengost, although McFarland was a stronger hitter.