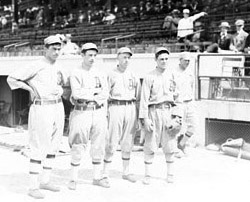 The $100,000 infield was a vaunted set of infielders who played for the Philadelphia Athletics in the Dead ball era, at a time when the team was winning pennants.

The infield consisted of Stuffy McInnis, Eddie Collins, Jack Barry, and Frank Baker. In 1910, when they won the World Series, Collins was 23, Barry was 23, Baker was 24 and McInnis was 19. McInnis did not become a regular, replacing Harry Davis, until 1911, another year when the A's won the World Series. The foursome were also part of the 1913 World Series champions before the A's were stunned by the Miracle Braves in a bid for another title in the 1914 World Series. In 1913, Collins, Baker, McInnis, and Barry combined for 26.9 WAR, or 61.1% of the entire team's 44-WAR total.

The foursome was broken up in 1915, when Collins was purchased by the Chicago White Sox and Baker sat out the season because of a contract dispute. Later in the year, Barry was sold to the Boston Red Sox. McInnis remained with the Athletics through 1917.

A similar term was later used in the Negro Leagues to describe the star-studded Newark Eagles' combination of three Hall-of-Famers - inflation made that group the Million Dollar Infield.