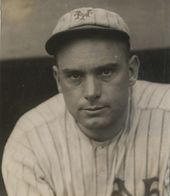 "Baltimore's Jack Bentley typifies the minor-league superstar, ruthlessly penalized because he was a local draw. The versatile Bentley was often called the Babe Ruth of the International League. In 1920, playing in 145 games, 22 of them as a pitcher, Bentley batted .371 on 231 hits, 71 of them for extra bases. He led the league in RBI with an extraordinary 161. When he was not pulverizing baseballs, Bentley was mystifying batters, as he went 16 and 3 for a winning percentage of .842. He also led the league in earned-run average with 2.11. Bentley batted .365 over five seasons before he persuaded Jack Dunn to sell him to the New York Giants - as a pitcher. He was already twenty-eight years old." - William Curran, from the book Big Sticks

Jack Bentley was a two-way player who appeared in 138 major league games as a pitcher and 287 total. Oddly enough, his ERA+ is 91 and his Adjusted OPS is also 91.

According to the Baltimore American newspaper on April 3, 1921, during a Baltimore Orioles spring training trip to Richmond, Bentley met up with "war pal" Capt. Pete Dumford. The article, "Captain Bentley Meets Pal of War in Richmond," goes on to explain that both Bentley and Dumford were Captains in Baltimore's 313th Infantry. Dunford was assigned to Company A, while Bentley was assigned to Headquarters Company. Dumford goes on to mention that the last time he had seen Bentley, "[he] was chasing two Germans in a trench." Bentley, the article notes, was serving an assignment to cover the German-occupied areas.