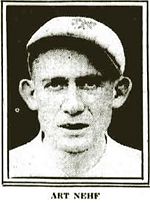 Art Nehf was a key pitcher on the great New York Giants teams of 1921-1925 that had so many Hall of Fame players. He closed out his career pitching for the pennant-winning Chicago Cubs of 1929 that featured Hack Wilson and Rogers Hornsby.

The most similar player to Nehf, according to the similarity scores method, is his contemporary, Urban Shocker.

He is the last major league player to come out of the Rose-Hulman Institute of Technology. He was inducted into the Indiana Baseball Hall of Fame in 1989.