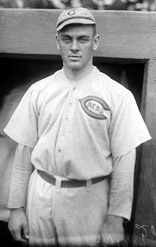 Hod Eller pitched 5 seasons in the majors, all with the Cincinnati Reds, and never posted a losing record in his big league career.

A native of Muncie, Indiana, Eller began his baseball career with the Champaign-Urbana Velvets of the Illinois-Missouri League in 1913, winning 15 games for the club that summer. He spent the next three years in the Three-I League and, after leading the circuit with 19 wins in 1915, earned a tryout with the Chicago White Sox but did not make the club. After the 1916 campaign, he was selected by the Reds from the Moline Plowboys in the 1916 Rule V Draft.

As a rookie with Cincinnati in 1917, Eller pitched mostly out of the bullpen and won 10 games with a 2.36 ERA. In the 9th inning of an August 21st game against the New York Giants, he struck out the side on nine pitches. The next year, 1918, appearing more often as a starter, he won 15 with an identical earned run average as the year before. He had his best season in 1919, going 19-9 with 7 shutouts and throwing a no-hitter against the St. Louis Cardinals on May 11th. His team reached the World Series, and he hurled two complete games in it: in Game 5, he earned a win while at one point striking out six straight Chicago White Sox batters; in Game 8, he went the distance as the Reds clinched the championship. Of course that World Series is forever tainted by the Black Sox Scandal.

Eller won 13 games for Cincinnati in 1920 but recorded just 2 wins in 13 appearances for the team the next year. Returning to the minors, he split the 1922 campaign between the Mount Sterling Essex of the Blue Grass League (for whom he was a player-manager) and the Oakland Oaks of the Pacific Coast League. He managed Mount Sterling again the following summer and ended his baseball career at age 30 after playing for the Indianapolis Indians of the American Association in 1924.

Eller's particular weapon was the "shine ball", a pitch obtained by doctoring the baseball. Hod would rub a patch of the baseball completely smooth; with the rest of the surface of the ball being rougher in comparison, the smooth patch would impart special movement on the pitch. The pitch was made illegal after the 1920 season when the major leagues cracked down on the spitball and other pitches that required the ball to be defaced to impart effectiveness. Eller had already begun his irreversible decline by that point, but the decision to ban his signature pitch put the final nail in the coffin.

According to research by Gary Ashwill, Eller occasionally served as an umpire in Negro National League games and pitched at least once for the famous Twenty-Fifth Infantry team which produced several Negro League players.