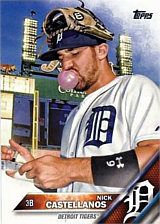 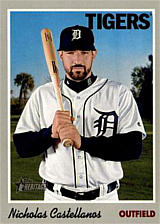 Nick Castellanos has slugged 120 home runs while playing both third base and right field regularly since his debut in 2013. After steady play with the Detroit Tigers, he exploded as a deadline acquisition by the Chicago Cubs in his walk year, 2019, then cashed in as a free agent with the Cincinnati Reds.

Originally a third baseman, Castellanos played for the United States when they won Gold at the 2009 Junior Pan American Games. He led his high school to a state title in 2010, then was chosen by the Tigers as a supplemental first rounder, 44th overall, in the 2010 draft. The pick was compensation for Detroit's loss of Brandon Lyon to free agency. He was Detroit's first choice that year, as they had lost a prior pick due to their signing "Papa Grande" Jose Valverde. Nicholas was signed by scout Rolando Casanova and made his pro debut that summer, going 8 for 24 with 2 doubles and 4 walks for the GCL Tigers. He was a solid minor leaguer, winning the Larry Doby Award as MVP of the 2012 Futures Game. Starting at DH for the US, he went 3-for-4 with a walk, scored three times and drove in three runs on a home run off Julio Rodriguez in the 6th inning. The US won handily, 17-5.

The Tigers' top prospect in 2013, Castellanos played the outfield for the Toledo Mud Hens, hitting .276/.343/.450 with 37 doubles, 18 homers and 76 RBI in 134 games before being called up when rosters expanded on September 1st. He credited minor league coach Gene Roof for helping him learn to play the outfield. He made his debut on the day of his call-up, pinch-hitting for Don Kelly in the 7th inning of a scoreless game against the Cleveland Indians; he flew out to right against Nick Hagadone then stayed in to play left field. He grounded out in the 9th to finish 0-for-2. Overall, he went 5 for 18 (.278) in 11 games. After the season, the Tigers traded first baseman Prince Fielder to the Texas Rangers, which in turn meant that third baseman Miguel Cabrera would return to first and third was now ripe for Castellanos' plucking.

Nicholas, who was generally called Nick at that time, played 148 games for the Tigers in 2014, hitting .259 with 11 homers and 66 RBI. It was solid production for a 22-year-old rookie, but Tiger fans were disappointed as they expected something closer to his brilliant minor league numbers. In the postseason, he went 1-for-10 in the ALDS against the Baltimore Orioles, his only hit a solo homer off Wei-Yin Chen in a 7-6 loss in Game 2 on October 3rd. His sophomore season in 2015 was very similar to his rookie year, as he played 154 games, hitting .255 with 15 homers and 73 RBI. After a 96 OPS+ as a rookie, he brought the number up ever so slightly to 98. He took a big step forward in 2016 when, after 105 games, he was hitting .286 with 18 homers and 58 RBI. On August 6th, he suffered a fracture in his hand when hit by a pitch, putting him out of action for a month at a time when the Tigers were making a run at first place in the AL Central. He only played another 5 games after his return in September and the team missed the playoffs.

Heading into 2017, he indicated that he wanted to be called by his full birth name. He had generally been known as "Nick" until then. It was a similar season to years gone by, hitting .272 but with an additional power boost, cracking 26 home runs and a league-leading 10 triples with 101 RBI. With the Tigers making like Tom Petty and free fallin', J.D. Martinez was moved and young Jeimer Candelario acquired to take over third base. Beginning in September, Nicholas made the move to right field for the remainder of the season. Though he "only" hit 23 homers in 2018, his slash line made a strong push forward, thanks in large part to 46 doubles, and he hit .298 with a .500 slugging percentage. On August 13th, he went 5-for-5 with 5 RBI against the Chicago White Sox, one of 56 multi-hit games, third best total in the American League. He fell somewhat to start his 2019 season, hitting a more routine for him .273 in 100 games when the Chicago Cubs wrested him for their playoff push on July 31st. Nick came alive in a manner that undoubtedly made Peter Frampton proud, hitting a monster .321/.356/.646 while besting or nearly besting all of his totals that year in the AL. Combined, he finished with his first 100 runs scored season, 27 home runs and 58 doubles. Part of this was probably just relief at no longer playing in Comerica Park: he had been very critical at how the ballpark worked to sap the numbers of power hitters like him, something that was no longer an issue in the hitter-friendly Wrigley Field. A free agent after the season, he signed a lucrative four-year, $64 million deal with the Cincinnati Reds, another team playing in a favorable ballpark.

His first season with the Reds was a disappointment, however. It was cut to 60 games because of the COVID-19 pandemic, and when it finally got going at the end of July, he hit with power, but for a low average. He slugged 11 doubles and 14 homers while playing in all 60 games, but batted just .225; a low walk rate also sank his OBP, all the way to .298, and as a result his OPS+ was just 99, his first time below 100 since his sophomore season in 2015. But the Reds did manage to qualify for the postseason, albeit only to make a quick exit after failing to score a single run in their two losses to the Atlanta Braves in the Wild Card Series. Nicholas was actually one of the better hitters on the team, going 3 for 10 with a double.

In 2021, he had a great first half with the Reds, hitting .331 with 18 homers and 59 RBIs in 84 games. A tremendous month of May, in which he batted .409 in 24 games, was particularly impressive, but in reality he was good in each of the first three months as the Reds managed to stay among the leaders of the NL Central. He and teammate Jesse Winker were both voted as starters in the 2021 All-Star Game, a first for both outfielders. However, a few days after the game, on July 16th, he was hit by a pitch on the right wrist by Adrian Houser of the Milwaukee Brewers, and while he did not go on the injured list as x-rays did not indicate that there was a fracture, he hardly played over the next week. On July 21st, CAT scan revealed that he had suffered a microfracture and would need some rest, the question being how long he would be out.

He was generally called "Nick" Castellanos from the time he was drafted until he had completed a few seasons in the majors. He then requested that he be called by his full first name, Nicholas, to which everyone obliged: for example, his player page on mlb.com appeared under the long form of his first name, as did some of his baseball cards - see above. However, in 2021, he returned to using "Nick" as his first name, and once again, most people went along with the return to the former style. His brother, Ryan Castellanos, was drafted by the Tigers in 2015.