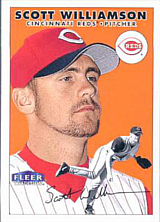 Scott Williamson's 2003 season was perhaps one of the oddest plot twists in the pitching history of the Boston Red Sox. In 24 regular season games, Scott had neither a win nor a save to his name. In the postseason however, he won two of the three Red Sox victories in the ALDS, and in the ALCS, he saved all three wins against the New York Yankees.