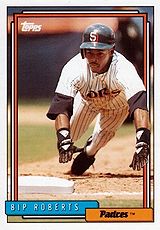 In 1992, while playing for the Cincinnati Reds, Bip Roberts tied the National League record for consecutive hits (10). He was also the team's MVP that year, and went 2-for-2 in the 1992 All-Star Game. In 1994, playing for the San Diego Padres, he had the longest hitting streak in Major League Baseball that year. On June 3, 1995, he ended Pedro Martinez's bid for a perfect game with a hit in the 10th inning.

He had first come up to the Majors as a second baseman with the Padres in 1986; he had been selected in the 1985 Rule V Draft from the Pittsburgh Pirates' organization the previous winter and had to spend the entire season on the Padres' major league roster. He hit .253 in 101 games, with no power, and returned to the minor leagues for more seasoning the next two years. He came back to stay in 1989 as a super utility player, getting into 117 games and batting .301 while getting starts in LF, RF, 3B, SS and 2B. He would keep shuttling between the infield and the outfield for the rest of his career, never truly holding a regular job but always getting considerable playing time. He was a good hitter for average, topping the .300 mark six times, and he could also draw the occasional walk. He was very fast, twice stealing over 40 bases in a season. His contemporary Tony Phillips was a similar type of player, used all over the field while usually occupying the leadoff spot in the line-up, although Phillips had more power and drew more walks while hitting for a lower average.

Roberts only made the postseason once in his career, with the Cleveland Indians in 1997. He had joined the team on August 30th as a late-season pick-up from the Kansas City Royals. He hit .271 in 23 games for the Indians, splitting his time, as usual, between the infield and outfield, then played regularly in the postseason. In the World Series, he was one of his team's most productive hitters, going 6 for 22 with 4 doubles, 3 walks, 3 runs and 4 RBI as the Indians lost in seven games to the Florida Marlins.

Roberts became an assistant coach at Academy of Art University in 2011.