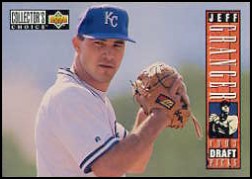 Jeff Granger pitched four years in the major leagues with a career record of 0-1. Most of his appearances were with the Kansas City Royals in 1996.

In the minors, he pitched from 1993-2000. After he left the Royals organization, he was in the minor league organizations of five other clubs. Perhaps his best year in the minors was in 1996 with the Omaha Royals, where he appeared in 45 games with an ERA of 2.34.

A first-round pick out of Texas A&M University, he pitched there at the same time as Kelly Wunsch.