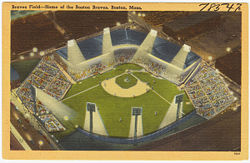 Braves Field was the home of the Boston Braves from 1915 through 1952. It hosted the 1948 World Series. The stadium then was renamed Nickerson Field and was used as a football stadium for Boston University. The stadium still stands today.

Braves Field was built by Braves owner James Gaffney, who considered the team's South End Grounds on Walpole Street to be woefully inadequate in the wake of the opening of Fenway Park in 1912. A New York City politician known for his ties to the construction industry, Gaffney made it his task to build a ballpark that would rival any other in the major leagues. Flush from his team's surprise win in the 1914 World Series, he acquired a sizable chunk of land fronting on prestigious Commonwealth Avenue, which was a former golf course that the city of Boston had taken over to build an armory. A good portion of the golf course remained unused, and Gaffney used his connections to buy it cheaply, turning the frontage on Commonwealth Avenue into commercial sites developed at a handsome profit, and reserving the back section, separated from the Charles River by a rail yard, for his ballpark.

Braves Field was built in record time: Gaffney unveiled the design on March 8, 1915 and the ballpark was ready to host its first game on August 18, 1915 with a Braves win over the St. Louis Cardinals. the target opening date of September 1st had not only been met, but surpassed, and this was no ramshackle construction: 750 tons of concrete had been poured on the site, and the park featured a covered grandstand from first to third base, seating pavilions in left and right field, and a large bleachers section behind the right field fence. The seating capacity was 46,000, making it the first ballpark ever to seat over 40,000. The park hosted its own trolley station within the building. Its playing field was designed to Gaffney's specifications: he considered the inside-the-park home run the most exciting play in baseball - this was the height of the Deadball Era - and the park was conceived with fences so distant that hitting a ball beyond them was near impossible. That configuration would prove a major drawback when the live ball era began a mere five years later, and the Braves were stuck with a ballpark that sucked all power from its hitters. They tried moving the fences around continually to counteract this problem, but their ability to change the park's characteristics were limited because of the huge size of the grandstand, which could not be moved at all. The huge seating capacity was also a detriment, as large tracks of empty seats would become a distinguishing feature of the park. Indeed the right field bleachers got their nickname of the "Jury Box" when a sportswriter noticed that exactly 12 people were seating in its 2000 seats at a sparsely attended game...

Gaffney sold the Braves to a group led by Percy Haughton in 1916, making a nice profit, but retained ownership of the park, saddling the new owners with a predatory lease that made it impossible for them to turn a profit. Originally considered one of the most beautiful ballparks in the country, Braves Field quickly became an albatross on the franchise. There was little money spent on its upkeep, and it rapidly began to break down, the process aided by the grit and locomotive smoke originating in the rail yards beyond the outfield fence. After a brief era of success in the late 1940s, the Braves fell back in the standings and lost the battle for the hearts of Boston's fans to the Red Sox. During spring training of 1953, Braves owner Lou Perini announced he was immediately moving the team to Milwaukee, WI, where public funds had allowed the construction of a brand new ballpark, located in the suburbs and surrounded by a sea of parking lots. Ironically the 1953 All-Star Game had been scheduled to take place in Braves Field, but it was quickly moved to Philadelphia, PA after the Braves left.

Braves Field was acquired by Boston University and converted to a football stadium. Most of the grandstand was demolished, although the right field pavilion was kept and the administration and ticket sales building now holds the headquarters of the campus police force. Its scoreboard was transferred to Kansas City's Municipal Stadium.

One little remembered fact about Braves Field is that it was used by the rival Boston Red Sox on a few occasions, most notably as their home park during the 1915 World Series (which is ironic, given the Braves had borrowed Fenway Park when they themselves played in the Series in 1914). Also, when a municipal law banned the playing of Sunday baseball within 1000 feet of a church for a few years, making Fenway unsuitable, the Red Sox used Braves Field as their Sunday home between 1929 and 1932, at which point the by-law was repealed.

The World Series was played at Braves Field in 1915, 1916, and 1948. The 1915 and 1916 Boston Red Sox]] played their home World Series games at the new Braves Field, as its capacity at the time was larger than Fenway Park. The Braves hosted three games of the 1948 World Series.

The following year, the Red Sox played the Brooklyn Robins in the 1916 World Series. In Game 1, the Red Sox defeated Brooklyn 6-5 at Braves Field in front of 36,117. On Monday, October 9, Boston left-hander Babe Ruth pitched against Sherry Smith in front of 47,373.[3] Ruth and Smith dueled for 14 innings, before Ruth and the Red Sox won in the bottom of the 14th 2-1. The Red Sox won their second consecutive World Series with a 4-1 victory in Game 5 at Braves Field, with 43,620 in attendance.[4]

On Saturday, May 1, 1920, at Braves Field, the Boston Braves and Brooklyn Robins played 26 complete innings in a game that ended in a 1-1 tie, called due to darkness by Home Plate Umpire Barry McCormick.[7] [8] The longest Innings game in Major League history. Starting pitchers, Leon Cadore (Brooklyn) and Joe Oeschger (Boston), both pitched the entire game in front of 4,500 fans. The 26 innings by both pitchers set an unbroken record and it is estimated conservatively that each threw at least 300 pitches.[9] Oeschager threw 21 consecutive scoreless innings in the game, Cadore threw 20. Second baseman Charlie Pick of the Braves went 0-11, the worst single day at the plate in MLB history.[10] Cadore faced 95 Braves hitters, while Oeschager faced 90 hitters.[11]

There were four no hitters pitched at Braves Field. (None was a Perfect Game.):