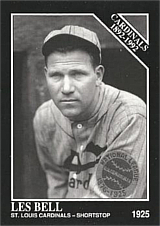 "I'll never forget my first big league game [in 1923]. The club wasn't going anywhere, so they loaded the lineup with kids, me at short, another fellow at first, and so on. The first ball that was hit down to me I picked up cleanly and threw with everything I had. Listen, I had a strong arm. I sure did. I think I must have broken a seat ten or fifteen rows behind first base with that throw. A couple of innings later I had my second chance. This time that ball really flew, and I must have broken a seat twenty rows behind first base. When I came into the dugout after that inning, I was feeling pretty blue. Who sits down next to me but the regular first baseman, Jim Bottomley. All he did that year was hit .371. Jim put his arm around me and said, 'Now kid, Old Jim will be out there tomorrow playing first base. So when you throw the ball, just throw it in the direction of the base, and Old Jim will get it.' That made me feel better, but I got to laugh now when I think about it." - Les Bell, from Peter Golenbock's The Spirit of St. Louis

Les saw trials in his first two big league seasons with the St. Louis Cardinals before wresting third base from Specs Toporcer in 1925. The 1926 Cards featured Hall of Famers Rogers Hornsby, Jim Bottomley, and Chick Hafey, but it was Les who had the highest slugging percentage on the team. His .518 mark was nearly 100 points higher than any other major league season and he finished sixth in the MVP vote. His production tailed off the next year and he finished his big league time with two seasons each with the Braves and as a Chicago Cubs bench player. He later managed in the minor leagues for a number of years.