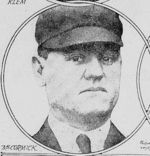 His major league playing career ran from 1895, when he made his debut with the Louisville Colonels, until 1904, when he played his last game with the Washington Senators. An infielder, he played a total of 989 games over 10 seasons, hitting .238.