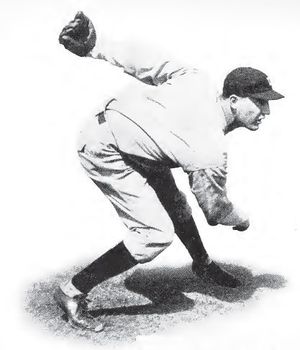 Pitcher Lynwood "Schoolboy" Rowe was 158-101 in the majors during a 15-year career. He pitched in three World Series and was named to three All-Star teams.

He had his best year in 1934, going 24-8 with a 3.45 ERA for the Detroit Tigers and winning 16 consecutive decisions that season. In that year's World Series against the St. Louis Cardinals, he retired 22 consecutive batters en route to a Game 2 victory. However, he was the losing pitcher in Game 6 as the Tigers lost the Series in seven games.

The next season, 1935, Rowe won 19 games as the Tigers reached the World Series again. He lost both of his starts facing Lon Warneke, but he also won Game 3 in relief of Elden Auker and Chief Hogsett. The Tigers held on to beat the Chicago Cubs four games to two. He then was felled by shoulder pain, winning only one game over the 1936 and 1937 season, but managed to make a miraculous comeback, picking up 10 wins in 1939 and going 16-3 in another pennant-winning season in 1940. His bad luck in the Series continued in that year's World Series, however, when he lost both of his starts again, against the Cincinnati Reds, this time facing Cincinnati's ace Bucky Walters both times, giving him five defeats in the World Series in his career.

Rowe was often used as a pinch-hitter. He had 28 major league pinch-hits in 101 at-bats. His overall lifetime major league batting average was .263 in 909 at-bats.

He seemed done again during the 1942 season, when both the Tigers and the Brooklyn Dodgers gave up on him, but he made a second comeback in 1943, when he was 14-8, 2.94 for the Philadelphia Phillies. World War II then intervened and Rowe left baseball to serve in the Navy from February 1944 to November 1945. He then returned to pitch four more seasons with the Phillies, from 1946 to 1949, winning in double figures the first three of these. After his playing career ended, he was a Tigers coach in 1954 and 1955 and was a scout for the club until his death.