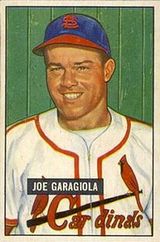 Joe Garagiola was a decent enough catcher in the 1940s and 1950s, but became much more famous after his playing days as a celebrity. He began in this line early, as he was a much liked after-dinner speaker in the off-season during his playing career, thanks to his large store of amusing anecdotes about contemporary players. He then moved into broadcasting after he retired as a player. He was not only a broadcaster, but his 1960 book "Baseball is a Funny Game" was a best-seller and helped to make him a frequent guest on shows like the Johnny Carson late-night TV show. Similar to catcher Bob Uecker years later, Garagiola liked to disparage himself.

Garagiola grew up in St. Louis, MO, and was a boyhood friend of another catcher, Yogi Berra. The two were sons of Italian immigrants who hardly spoke any English. As he explained, "if you saw us, you'd say this one will probably go to reform school and that one will end up in the federal penitentiary. We were just normal kids."

He began his professional career with C league Springfield in 1942, moving up to AA Columbus the next. Garagiola played one game with Columbus in 1944 before missing the rest of that season, all of 1945, and part of 1946 to military service. When he was released from active duty, however he made an immediate splash in the major leagues by coming up at the age of 20 for the St. Louis Cardinals who won the 1946 World Series. Garagiola hit .316 in the Series, including a four-hit game in Game 4, when the Cardinals drubbed the Boston Red Sox by a 12-3 score. He was the first rookie catcher to have a four-hit game in the postseason; it would be 64 years until Buster Posey became the second.

After several years with the Cardinals, Garagiola went to the Pittsburgh Pirates, which were quite a poor team, in 1951. Some of Garagiola's anecdotes date from that era (1951-1953), and many center around Brandy Davis, who played on the Pirates and later became a long-time scout. Garagiola then went to the Chicago Cubs in 1953, also not a highly competitive team, at a time when they were integrating the team with Ernie Banks and Gene Baker. He finally ended up with the New York Giants World Series-winning team for 5 games in 1954, not appearing in the Series. 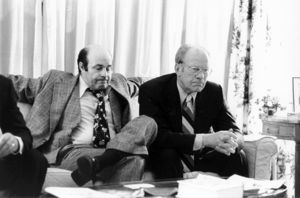 Garagiola and Gerald Ford in 1976.

Joe Garagiola was a broadcaster for the St. Louis Cardinals (1955-1962), the New York Yankees (1965-1967), the California Angels (1990), and the Arizona Diamondbacks (1998-2012). He also had a long association with the NBC television network, which had him work on broadcasts of its Saturday afternoon Game of the Week in the 1970s and early 1980s. As a broadcaster, he was known for focusing on the play and not on statistics, and for introducing many of his amusing stories into his broadcasts. He liked to say that he called the game from the perspective not of a star but of a player who was never sure if he would get into the game. In 1973, he hosted a series of short documentaries for NBC called The Baseball World of Joe Garagiola, meeting with lesser-known personalities around baseball, but also letting stars like Hank Aaron interview him using questions he was being asked during his chase of Babe Ruth's home run record (example: "Hank, I've been a huge fan of yours for years. Tell me, are you a right-handed or a left-handed batter?"). These capsules were broadcast before games and were a huge popular and critical hit.

Working with NBC he was a regular on its Today show from 1967 to 1973 and again in the early 1990s. His friendship with Johnny Carson meant that he got to be guest host on the Tonight Show a number of times, including the one time in 1968 when Paul McCartney and John Lennon of the Beatles appeared on the show. The studio was filled with celebrities that evening and, as he quipped: "I was the only unknown there - and I was hosting."

Garagiola was also the long-time voice of the Westminster Kennel Club Dog Show. He is the father of former Arizona Diamondbacks General Manager Joe Garagiola, Jr.. He was an active spokesman against the use of chewing tobacco, warning young players about the danger of mouth cancer. He was also a close friend of former President of the United States Gerald Ford, whom he met playing golf.

He announced his retirement from broadcasting in spring training of 2013, at the age of 87. He had spent 58 years in the booth, in addition to his service time as a player. In 2014, he was named recipient of the third Buck O'Neil Lifetime Achievement Award given by the Board of the Baseball Hall of Fame "to honor an individual whose extraordinary efforts enhanced baseball's positive impact on society, broadened the game's appeal and whose character, integrity and dignity are comparable to the qualities exhibited by O'Neil." He passed away in March of 2016 at age 90.

"One thing you learned as a Cubs fan: when you bought your ticket, you could bank on seeing the bottom of the ninth." - Joe Garagiola

"Baseball is drama with an endless run and an ever-changing cast." - Joe Garagiola

"Never trust a baserunner who's limping. Comes a base hit and you'll think he just got back from Lourdes." - Joe Garagiola