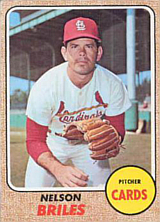 “I’m starting a World Series game, the first one in my life, and I am sleeping on the floor of the living room so my mother could have a bed.” - Nelson Briles, to Peter Golenbock, on the 1967 Fall Classic in The Spirit of St. Louis

Pitcher Nelson Briles was part of two World Series champions in his fourteen-year career. He won nine consecutive starts for the St. Louis Cardinals in 1967 and got the victory in Game 3 of the 1967 World Series over the Boston Red Sox. In the 1971 World Series, he pitched a two-hitter for the Pittsburgh Pirates in Game 5 to give the club a 4-0 win over the Baltimore Orioles. Nelson enjoyed a fair amount of regular season success as well, with a personal best 19-11 record and 2.81 ERA as well as career bests in complete games (13), shutouts (4), innings pitched (243 2/3) and strikeouts (141) for the 1968 NL pennant winners. In 452 regular season games, Nellie was 129-112 with a 3.44 ERA and 22 saves.

While trying to catch on with the New York Mets in spring training 1979, Briles appeared in a skit on Saturday Night Live, where "former big league great" Chico Escuela (played by Garrett Morris) was attempting to make his own comeback at age 41 after penning his tell-all memoir, Bad Stuff 'Bout The Mets.

After retiring, Briles was a broadcaster for the Pittsburgh Pirates and Seattle Mariners and held a front office position with the Pirates. He died at 61 after suffering a heart attack at a Pirates alumni golf tournament.