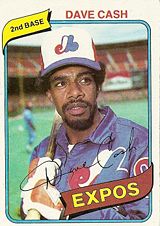 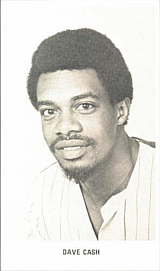 Dave Cash was a second baseman and leadoff hitter for the Pittsburgh Pirates, Philadelphia Phillies, Montreal Expos and San Diego Padres from 1969 to 1980. A three-time All-Star, Dave was the man who replaced Pirates' legend Bill Mazeroski at second base.

Cash was part of a loaded Pirates farm system who made his debut at the tail end of the 1969 season. After hitting .314 in limited play in 1970, he became a more integral part of the Pirate operation, gradually wresting the keystone sack from Maz by 1971. On September 1, 1971, he was part of what is believed to be the first all-black and Latino lineup in MLB history, along with Rennie Stennett, Gene Clines, Roberto Clemente, Willie Stargell, Manny Sanguillen, Al Oliver, Jackie Hernandez and Dock Ellis. Military service commitments combined with the rise of Stennett and a youngster named Willie Randolph conspired to move Cash in-state, swapped to the Philadelphia Phillies for Ken Brett after 1973.

With his finest three year stretch in the books, Dave was among the first batch of free agents following the 1976 season. His signing by the Montreal Expos was considered a major coup for the fledgling team. He started at second base for two seasons with the Expos, playing virtually every game. He hit a solid .289/.343/.375 with 42 doubles and 21 stolen bases in 1977 but his hitting slipped significantly in 1978 (.252/.291/.315), as did his fielding. Manager Dick Williams started using Pepe Frias as a defensive substitute every time the Expos had a lead late. In spring training 1979, Cash lost his job to the newly acquired "Cool Breeze" Rodney Scott. It was a hard blow for Cash, who had not seen the demotion coming, and he sulked for the early part of the season as a little used backup while Scott and the Expos were playing their best baseball ever. Dave got some more playing time in the second half and hit extremely well, batting .321 with a 114 OPS+ in 187 at bats. After the season, he was traded to the San Diego Padres for Bill Almon and Dan Briggs. He was handed the starting second base job to start 1980 but hit only .227 in 130 games. He was released at the end of spring training in 1981 and never played in the majors again. In 1989, he played for the Orlando Juice of the Senior Professional Baseball Association. He hit .321 in 35 games. The next season, he played for the Florida Tropics and hit .304 in 14 games before the league folded.