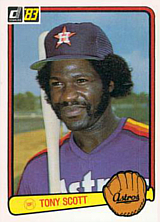 Outfielder Tony Scott was a 71st round choice by the Montréal Expos in the 1969 amateur draft. The Expos were an expansion team and needed to fill out their organization with players, but a couple of their late-round picks became solid major leaguers, Scott and C Terry Humphrey (who was drafted in the 39th round). An excellent defensive player with great speed, he reached the majors in September of 1973, when the Expos unexpectedly found themselves in a strange pennant race in the NL East. He got into 11 games, but had only one at-bat. After another cup of coffee in 1974, he won a starting job in the outfield in spring training in 1975 when the Expos wanted to go with "pitching, speed and defense" in what they called "Phase 2" of their development. He certainly had the speed and defense down pat, but his hitting left something to be desired, as he hit just .182 in 92 games and quickly lost his starting job.

Scott spent the 1976 season back in the minors with the Denver Bears of the American Association. It was an outstanding team (whereas the major league Expos were awful) and is remembered for having an outfield of Ellis Valentine, Andre Dawson and Warren Cromartie all three of whom would be starting for the Expos by the end of the season. However, Scott was the most-used outfielder on the team, hitting .311 in 106 games, scoring 63 runs and stealing 18 bases with a reputation as the best defensive outfielder in the circuit. There was no place for him on the Expos, especially as three other talented young outfielders were also around in Gary Roenicke, Bombo Rivera and Jerry White. On November 6th, he was traded to the St. Louis Cardinals in a six-player deal, which was the best thing that could have happened to him.

Scott was the most-used center fielder on the Cardinals from the start of the 1977 season until early in 1981. He hit .291 in 95 games his first year, which was the best season of his career, but he continued to see a lot of playing time the next three years, even though he was a back-up at all three outfield spots in 1978. In 1979, playing everyday in center, he played 153 games and stole 37 bases, both career highs. He lost his starting job early in 1981 when on June 7th, just before the beginning of the strike, he was traded to the Houston Astros in exchange for P Joaquin Andujar.

Tony had a solid second half for the Astros, hitting .293 in 55 games, and played in the postseason for the only time of career, going 3 for 20 as the Astros were eliminated by the Los Angeles Dodgers in the Division Series. He returned as the starting center fielder in 1982 but hit just .239. He gradually lost playing time and was released on June 22, 1984. Tony returned on a pact with the Expos a week later, finishing his major league career where it started. He played 991 games in all, hitting .249.

In 1989, Scott played for the Winter Haven Super Sox of the Senior Professional Baseball Association. He hit .360 in 51 games with the club.