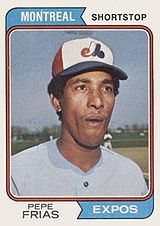 Pepe Frías was on the Dominican national team in the 1966 Central American and Caribbean Games. He was the last player from the independent Quebec Provincial League, which folded in 1971, to reach the majors. His performance there, in 1968, led to his signing with the Montreal Expos after he had previously washed out of Organized Baseball. He spent six full seasons as a back-up infielder with the Expos, from 1973 to 1978, before being traded to the Atlanta Braves prior to the 1979 season in return for pitcher Dave Campbell. He was the starter at shortstop for the Braves that year, hitting .259 in 475 at-bats with 18 doubles and his only career homer, then was traded to the Texas Rangers after the season and returned to his familiar back-up role for his last two years. In 1978, he had a very unusual stat line for the Expos, getting into 73 games, but collecting only 15 at-bats (during which he hit .267 and slugged .533, both career highs). That year, he was used almost exclusively as a late-inning defensive replacement for 2B Dave Cash in games in which the Expos were ahead.

In 1989, Frías played for the Fort Myers Sun Sox of the Senior Professional Baseball Association. Frias batted .225 in 17 games.