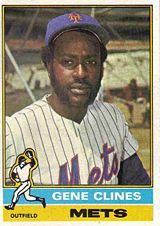 "It started that afternoon. I got to the ballpark and one of our batboys made the comment 'The Homestead Grays are playing tonight.' That thought stayed in my mind and didn't dawn on me until they were playing the National Anthem. I looked to my left and I saw Stargell and I looked to my right and I saw Clemente. I turned around and I started looking at all the positions. I said 'Now I understand what the batboy said earlier that afternoon.'" - Gene Clines, to George Castle, When The Game Changed

A good hitter, a fast runner and a strong defensive presence, Gene Clines simply never could break into the talented Pittsburgh Pirates outfield on a regular basis. He was a member of the 1971 championship squad, batting second and playing center field on the evening of September 1, 1971, when the Bucs became the first club to field an entire starting nine of African-American and Hispanic ballplayers. Even following a .334/.369/.421 line in 1972, coupled with the tragic death of superstar Roberto Clemente, did not open a starting spot for Gene as the Pirates elected to experiment with catcher Manny Sanguillen in right field before settling on the younger, power-hitting Richie Zisk. Clines became a valuable role player for the remainder of his career, spending time with the New York Mets, Texas Rangers and Chicago Cubs, and an accomplished pinch hitter.

In 1989, Clines played for the Bradenton Explorers of the Senior Professional Baseball Association. He played in 39 games and batted .328.