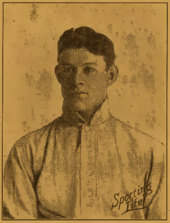 Harry McIntire pitched nine years in the major leagues, primarily as a starter. He typically had an ERA that was a bit worse than the league average, and his career record was 71-117.

In 1910 he was traded to the Chicago Cubs, and his win-loss percentages improved. He pitched in two games in the 1910 World Series.

He finished out his major league career with one game for the Cincinnati Reds in 1913, a team managed by his former teammate Joe Tinker.

One observer crunched some numbers and chose McIntire as one of the "meanest pitchers" in baseball history. The theory was that a pitcher who hits a lot of batsmen is aggressive, and if that pitcher also has few wild pitches, it is possible that pitcher was hitting the batsmen on purpose. McIntire ranks # 2 on this list, with 96 hit batsmen compared with 14 wild pitches. Meanest pitcher in baseball