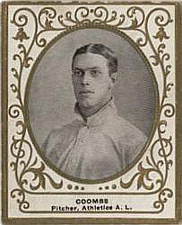 The most successful player to come out of Colby College, Coombs signed with Connie Mack's Philadelphia Athletics and made his big league debut three weeks after graduation, July 5, 1906. Jack kicked off his career on a high note, spinning a seven-hit shutout in blanking the Washington Senators, 3-0. He posted a 10-10, 2.50 record as a rookie, including an insane 24-inning complete game victory against the Boston Americans on September 1st. He battled Joe Harris in that game and both pitchers went all the way. racked up 18 strikeouts while Harris picked up 14; their combined total of 32 has not been matched since. The 18 strikeouts were an American League record at the time. He went 25-25 over the next three years despite really good ERAs, including a 7-5, 2.00 season in 26 games in 1908.

Coombs had one of the most dominant seasons in history in 1910. He finished 31-9 with a tiny 1.30 ERA, leading the AL in victories, games pitched (45) and shutouts (13!; still an AL record) while striking out 224 men in 353 innings. He went 18-1 in July alone and racked up 53 consecutive scoreless innings, the big league record until contemporary Walter Johnson passed him three years later. On August 4, he matched his record of 18 strikeouts in another marathon game, this one a 16-inning scoreless tie. On the back of Jack, the A's faced off with the Chicago Cubs in the World Series. Jack made three starts in the five-game triumph and excelled on both sides of the ball, going 3-0 with three complete games and a 3.33 ERA plus batting .385 with a double and three RBI.

Coombs was a college coach at Rice University (1918). He managed the Philadelphia Phillies for part of the 1919 season and was a member of the Detroit Tigers coaching staff in 1920. He was a coach at Williams College from 1921 to 1924 and Duke University from 1929 to 1952. An impressive 47 of his Blue Devils reached the majors. Perhaps the most prominent were Billy Werber and Dick Groat; his nephew, Bobby Coombs, was one of the Dukies to follow him to the bigs.

Additionally, Coombs wrote a widely read instructional book, Baseball: Individual Play and Team Strategy. During the 1911 off-season, he went on tour with teammates Chief Bender and Cy Morgan performing in a vaudeville show called "Learning the Game". He was inducted posthumously onto the Philadelphia Baseball Wall of Fame in 1992.