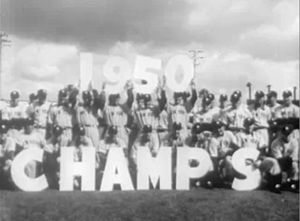 The 1950 New York Yankees played the 48th season in New York and the 50th overall, going back to the team's origins in Baltimore, MD. They finished with a record of 98-56, winning their 17th pennant, finishing 3 games ahead of the Detroit Tigers. New York was managed by Casey Stengel. The Yankees played at Yankee Stadium. In the World Series, they defeated the Philadelphia Phillies in 4 games.

The Yankees started the season on April 18th at Fenway Park by putting on the greatest Opening Day comeback in history. The Sox seemed to be off to the races that day, scoring three runs against Allie Reynolds in the bottom of the 1st. They added another in the 2nd and five more in the 4th, chasing Reynolds, by which point they had built a seemingly insurmountable 9-0 lead. But the Yankees managed to come back - and without even hitting a home run: they scored four in the 6th, then after the Sox had added another run in the 7tth, broke through with a nine-run 8th inning, and then added a couple more in the 9th for good measure, ending up 15-10 winners. 3B Billy Johnson led the way with 3 runs and 3 RBIs, and 2B Billy Martin, who did not even start the game, drove in three more in what was his major league debut, and incidentally became the first player to have two hits in one inning in his first game. The win went to Don Johnson, their third pitcher, and Joe Page picked up a save.