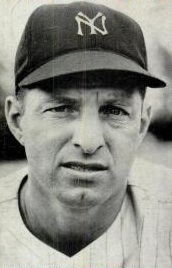 "Tommy was a terrific player. What made him so special was that he always played well in big games. It seemed like he never made any mistakes in the outfield. He was a true professional and an ultimate Yankee." - Bobby Brown

"Catching a flyball is a pleasure, but knowing what to do with it after you catch it is a business." - Tommy Henrich

Tommy Henrich was part of one of the greatest outfields of all time, along with Joe DiMaggio and Charlie Keller. He spent his entire big league career with the New York Yankees and played on seven World Series-winning clubs (although he actually played in the World Series only four times). Nicknamed "Old Reliable", he was known for his clutch hitting and steady defense.

Originally signed by the Cleveland Indians, Henrich never hit below .300 in the minors and showed power at the plate. After batting .346 for the New Orleans Pelicans of the Southern Association in 1936, he appeared in line to join the major league club. However, the Indians instead sold his contract to the Milwaukee Brewers of the American Association, allegedly because the club regarded Jeff Heath as a better prospect. Rather than go to Milwaukee, he and his father wrote to Commissioner Kenesaw Landis, stating their belief that the Indians were denying him a chance to reach the majors. Landis ruled in his favor and declared Henrich a free agent. He ultimately signed with the Yankees for a $25,000 bonus.

Following a brief stint with the Newark Bears, Henrich reached the majors for good with the Yankees in 1937 and hit .320 in 67 games as a rookie. By the 1940s, he was part of an outfield that consisted of Joe DiMaggio and Charlie Keller, and he hit a career-high 31 home runs in 1941. In Game 4 of the 1941 World Series with his club trailing the Brooklyn Dodgers, he struck out in the bottom of the 9th against pitcher Hugh Casey. However, Dodgers catcher Mickey Owen dropped the ball, Henrich ran to first base, and his team went on to win the game and the series.

After missing three seasons while serving in the Coast Guard during World War II, Henrich returned to the Yankees in 1946. The next year, he made the All-Star team for the first of four straight seasons and led the American League with 13 triples, while his team went on to win another World Series crown. In 1948, he had perhaps his best year at age 35, again leading the AL in triples, with 14, while also pacing the circuit with 138 runs scored and out-slugging every one of his teammates except DiMaggio. With DiMaggio slowed by injury at the start of the next season, Henrich picked up the slack, and the team ultimately won another pennant. In the World Series against the Dodgers that fall, he hit a game-winning home run off Don Newcombe in the 9th inning of Game 1, the first walk-off shot in Fall Classic history. The 1950 campaign was his last as a player, and he hit .272 and slugged over .500 as a part-timer.

Henrich played 11 seasons in the majors and hit one home run in each of the four World Series he appeared in. He had a strong lifetime OPS+ of 132, never falling under 100 in that category in his entire career.

"Tommy was a darn good ballplayer and teammate. He always took being a Yankee to heart. He won a lot of championships and did whatever he could to help us win." - Yogi Berra

Henrich died in 2009 at age 96 after a series of strokes. At the time of his death, he was the fifth oldest living former Major Leaguer and the oldest living Yankee.