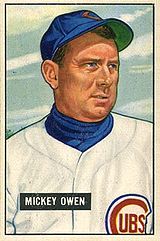 Mickey Owen was a catcher who played 13 years in the major leagues, achieving prominence in the war years when he was an All-Star four times. He was 4th in the MVP voting in 1942.

He appeared in the 1941 World Series batting usually eighth but sometimes seventh in the lineup. He is most famous for dropping a third strike pitch from Hugh Casey to Tommy Henrich of the New York Yankees with two outs in the 9th inning of Game 4 of the Series. Henrich reached first base, and the Yankees scored four runs to turn a 4-3 loss into a 7-4 victory.

After World War II, Owen defected to the Mexican League and was banned by Major League Baseball for three seasons. Owen was unimpressive in the Liga, batting just .256/~.356/.360 in 1946 for the Veracruz Blues; most of the other catchers in the League hit as well or better.

Once his playing career ended, Owen was a Boston Red Sox coach in 1955 and 1956. He was also a minor league manager (1953 and 1957) for the New York Yankees and Milwaukee Braves and a scout for the Baltimore Orioles in 1958-1959. Owen also founded the Mickey Owen Baseball School for Boys in Miller, MO, a baseball academy which he sold in 1964.

Away from the diamond, he served as sheriff of Greene County in Missouri from 1964 to 1980 and ran for the office of Lieutenant Governor in 1980.

He died July 13, 2005 of complications from Alzheimer's disease.

He co-wrote The Boys' Baseball Book with author Frank Farmer in 1963.