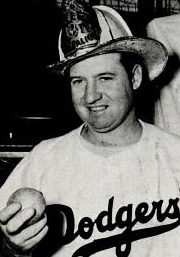 "...he was one guy who liked to drink. Hell, yeah. We would go to Boston and he would have a little handbag, and a normal guy would have a little handbag and a toothbrush or maybe a shirt or something. Not him. He'd have two quarts of whiskey in it. If he needed a shirt, he'd buy one up there. Oh, he went though money like water. He always had a pocketful of money. And he used to hang around with the racket boys. I know 'cause I was invited to go to Staten Island for a dinner with the racket boys. Only I didn't know it at the time. They had asked him to bring some ballplayers along, and so he asked me and Bob Ramazzotti and maybe Dick Whitman. So I'm sitting there, and who is sitting next to me but the guy in charge of nickelodeons. A racketeer. Casey was like brothers with them." - Carl Furillo, to Peter Golenbock, Bums: An Oral History of the Brooklyn Dodgers

"Hugh was kind of a loner. Outside of me, he didn't care too much about messin' around with other ballplayers, not that he didn't like them. He was just that type of fella. He would go up in his room after a ballgame and read a western magazine or western book and smoke them big cigars. That's about all Hugh would do. And drink. He'd have a few drinks, as most people did back in them days." - Kirby Higbe, to Peter Golenbock, Bums: An Oral History of the Brooklyn Dodgers 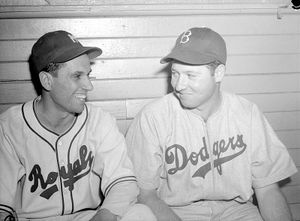 Nicknamed "Fireman", hard drinking Hugh Casey was one of the best relievers of his era. During his career, he posted a 51-20 record out of the bullpen (24-22 as a starter) for a winning percentage of .718 - the highest in history for a reliever with at least 50 decisions. But he is best remembered for a mistake pitch in a World Series game, and was dead before he reached 40.

Casey began his pro career in 1932 and briefly reached the majors with the Chicago Cubs in 1935, appearing in 13 games out of the bullpen. Back in the minors, he posted a 2.56 ERA for the Birmingham Barons in 1937 to lead the Southern Association. Following the 1938 campaign, he was selected by the Brooklyn Dodgers in the 1938 Rule V Draft. Casey joined the Dodgers in 1939 and won 15 games in 40 appearances, mostly as a starter.

By 1941, Hugh was primarily pitching in relief, and Brooklyn won the National League pennant. He struggled in the World Series, taking the losses in both Games 3 and 4. His loss in Game 4 is the stuff of baseball lore. Hugh entered with Brooklyn trailing the New York Yankees, 3-2, in the 5th, and was still on the mound nursing a 4-3 lead in the 9th; with two outs, he threw a curveball in the dirt on a full count to Tommy Henrich, who swung and missed, but the ball bounced away from catcher Mickey Owen, allowing Henrich to reach first base on a dropped third strike; a lot of sources have speculated that the troublesome pitch was actually a spitball. All hell proceeded to break lose and the Yankees led, 7-4, by the time the third out was recorded.

The Dodgers trained in Havana in 1942 and Casey was involved in an unusual incident that spring. Writer Ernest Hemingway was living in the Cuban capital and liked to hang around the Dodgers' camp. He befriended a few of the team's players and took them out to gamble and otherwise experience the local nightlife; one evening, he invited a number of players to his home and decided to have a boxing match with one of them. Casey was closest to his own size and got to don the gloves; he was also fifteen years younger and in much better shape than the celebrated writer and proceeded to hand him a good whipping, thrashing part of the living room in the process. Hemingway cooled down his relations with the Brooklyn players after the episode. Casey bounced back from his World Series struggles that summer, leading the National League with 13 saves.

Hugh entered the Navy in January 1943. After three years away from baseball during the war, he was discharged in December 1945. He picked up where he left off with the Dodgers, posting a 1.99 ERA in 1946 and leading the NL with 18 saves in 1947. He pitched in 6 games of the 1947 World Series, earning 2 wins and allowing only one earned run. But after posting an 8.00 ERA in 22 games for Brooklyn in 1948, he was released. Casey split the 1949 season between the Pittsburgh Pirates and New York Yankees. He spent one last pro season in the minors with the Atlanta Crackers, the same team with which he began his career years earlier, in 1950.

The transition after baseball was difficult for Casey. He took his own life in 1951. While talking on the phone to his estranged wife from an Atlanta hotel room, he shot himself with a 16-gauge shotgun. He had just been named as the defendant in a paternity suit, although he denied the charges. He was 37 years old.