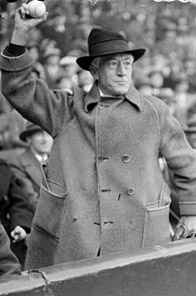 Inducted into Hall of Fame in 1944 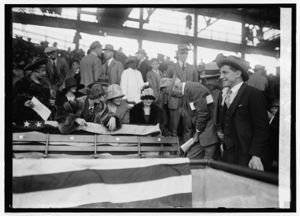 Landis signs scorecards for fans at the 1924 World Series

Judge Kenesaw Mountain Landis became the first Commissioner of baseball in 1920. He is best known for his handling of the 1919 Black Sox Scandal. His approach was to ban permanently the eight players at the heart of the scandal, plus others who were peripherally involved, even after they were found not guilty in a trial. He then steadfastly refused to hear their pleas for reinstatement, and handed out further suspensions to players and others associated with gambling allegations, effectively purging Major League Baseball of the association with gambling that had been prevalent since its creation in the 1870s. He served as Commissioner until his death in 1944.

Prior to becoming baseball commissioner, Landis served as a federal judge. He was appointed to the bench in 1905 by President Theodore Roosevelt.

Landis's unusual name is related to the battle of Kennesaw Mountain, in Georgia, where his father, a surgeon serving in the Union Army, lost a leg.

Landis has endured a lot of criticism over the years for his alleged role in delaying baseball's integration. During his entire tenure as commissioner, baseball was segregated, and Landis made no effort to use the powers of his office to reverse the situation, even when the success - on the field, if not at the gate - of the Negro Leagues had clearly demonstrated that the top black players of the 1920s and 1930s were the equal of their Major League counterparts. While Landis stated on a some occasions that he was not opposed to a club signing a black player, he also denied that there was a "gentlemen's agreement" among owners not to do so.

He was inducted in the Hall of Fame shortly after his death and into the Indiana Baseball Hall of Fame in 1983.

Quote: "We do not want baseball in America exempt from the liabilities of common life in America. We want the same rules applied and enforced on us as on everyone else." Kenesaw Mountain Landis, 1943.