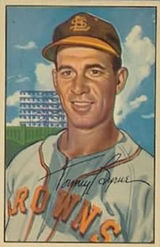 "... I never really believed in my own mind that I was so very wild... I didn’t think I was ‘losing’ wild, if you know what I mean. I used to feel that if they let me pitch I wasn’t going to give more than three or four runs a game, and I would get a couple back with my own bat, because I could hit.” - Tommy Byrne, to Bill Madden, 2003

An erratic southpaw who managed to stick around for thirteen seasons despite his wildness, Tommy Byrne averaged nearly one walk per inning during his career - once walking 7 Tigers in one inning before being lifted. He led the American League in walks three times, hit batsmen 5 times, and holds the AL record for most walks in an extra-inning game with 16. Still, he won 15 or more games three times for the New York Yankees, with a 16-5, 3.15 record in 1955.

Byrne was an an excellent hitter who was often called on to pinch-hit. His playing career concluded with Game 7 of the 1957 World Series when he singled with two outs in the 9th inning, but was left on base when Lew Burdette retired Bill Skowron to win the Series for the Milwaukee Braves. As a hitter, he compiled a .238 career BA with 14 homers - both stellar numbers for a pitcher. As a pitcher, Tommy was 85-69 with a 4.11 ERA and 1,037 walks in 281 games (1,362 innings). Byrne's main teammates were Yogi Berra, Mickey Mantle, Joe DiMaggio, Phil Rizzuto, Hank Bauer, Tommy Henrich, Ed Lopat, Gil McDougald, Vic Raschi and Allie Reynolds.