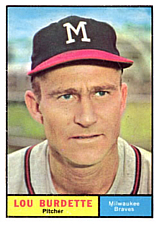 "I'm the greatest pitcher that ever lived. The greatest game that was ever pitched in baseball wasn't good enough to beat me, so I've got to be the greatest!" - Lew Burdette, 1959

""There should be 3 pitching statistics for Burdette: Wins, Losses, and Relative Humidity." - Red Smith, The New York Times 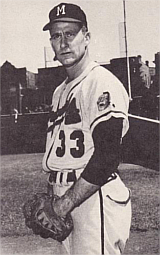 One of baseball's great pitchers of the 1950s, Lew Burdette won 15 or more games eight times during his major league career, including three World Series games in 1957. Lew was a pitcher for 22 years (1946-1967), one in college (1946); 18 in the majors (1950-1967) and six in the minors (1947-1951 and 1967). He graduated from Nitro High School in 1944 at 17 and entered the Armed Forces for World War II. He was mainly a finesse pitcher who did not throw especially hard or strike out many hitters. Accused frequently of throwing a spitball, he was also known for his constant agitation on the mound. Yet, he posted over 200 career victories and was one-half of the Braves' one-two punch along with lefty Warren Spahn.

Lew attended the University of Richmond in 1946. Signed by scout Bill McCorry of the New York Yankees in 1947, he broke into organized baseball at age 20 with the Norfolk Tars in the Piedmont League, going 1-1 with a 4.33 ERA. He then pitched for the Amsterdam Rugmakers in the Canadian-American League the same year, going 9-10 with a 2.82 ERA. Teammates recall that he spent much of his time playing pinball, using much of his expendable income on that hobby. He was with the Quincy Gems in the Three-I League the next year, posting a 16-11 record and 2.02 ERA, tying Art Bohman for the league lead in wins and finishing second to David Thieke in ERA. He toiled for the 1949 Kansas City Blues of the American Association, going just 6-7 with a 5.26 ERA.

Burdette was involved in at least one racial incident in the minor leagues when, in 1949, he hit Jim Pendleton, one of the first black players in the American Association, in the head with a fastball, sending Pendleton to the hospital. He married Mary Ann Shelton on June 30, 1949. In 1950, Lew went 7-7 with a 4.79 ERA for Kansas City and got a late look with the Yankees. Sent back down to the San Francisco Seals of the Pacific Coast League in 1951 and going 14-12, 3.21 for them, he was traded, with $50,000, to the Boston Braves for Johnny Sain on August 29, 1951.

Lew played for the Boston Braves from (1951-1952). On September 26, 1951, Jackie Robinson of the Brooklyn Dodgers stole home against him, infuriating the Braves. Moving west with the Braves to Milwaukee in 1953, Burdette stayed with the Braves more than a decade (1953-1963). In 1953, according to Roy Campanella, Burdette knocked him down twice, and then yelled at him, "Nigger, get up and hit." On the other hand, when Campanella lay in his hospital bed after his paralyzing accident, Burdette was one of the few opposing players who came to see him. On May 12, 1954, Dodger Gil Hodges' home run in the fifth inning spoiled Burdette's bid for a no-hitter in the Braves 5–1 win. On May 31, 1956, the Chicago Cubs and the Braves kept beating each other like government mules, with Milwaukee coming out on top, 15–8. Burdette was the winner, while Paul Minner absorbed his 12th loss in a row to the Braves.

On August 13, 1957, Burdette hit his first two home runs to beat the Cincinnati Redlegs, 12-4. On October 3, in Game 2 of the World Series, Burdette defeated Yankee Bobby Shantz, 4-2. On October 7th, Burdette won his second WS game against New York - a brilliant 1-0 shutout - to give Milwaukee a 3-2 Series lead. On October 9th, with Warren Spahn stricken by the flu, Burdette pitched with two days rest, to achieve his third complete game and second shutout to beat New York, 5-0. The Braves won their first World Series championship since the "Miracle Braves" of 1914 beat Connie Mack's Philadelphia Athletics. On July 10, 1958 Burdette hit two home runs to beat the Dodgers, 8-4. On October 2, the Braves erupted for seven runs in the first inning and went on to defeat the Yankees, 13-5, in the World Series. Burdette was shaky but beat New York for the fourth consecutive time. He also chipped in with a 3-run home run. On October 6th, the Yankees finally solved Burdette, scoring six runs in the bottom of the 6th and winning, 7-0, behind the 5-hit pitching of Bob Turley. On October 8th, the Yankees won the World Series handily on Bill Skowron's three-run home run off Burdette in the eighth inning that put the game on ice, 6-2.

When Burdette posed for his 1959 Topps baseball card, he grabbed teammate Warren Spahn's glove and pretended to be a lefty. Topps missed the joke and printed the card with the error. On April 16th, 1959, the Philadelphia Phillies Dave Philley, who ended 1958 with eight consecutive pinch hits, started 1959 with a pinch-hit double in his first pinch at bat to extend his major league record. Despite Philley's new mark, Burdette and the Braves won, 7–3, allowing just six hits in beating Russ Meyer. On April 26th, Cincinnati Reds pitcher Willard Schmidt was twice hit by pitches in the third inning in an 11–10 win over the Braves. Braves pitchers Bob Rush and Burdette did the plunking. It was a first in the major leagues, but the major league mark would be tied in three years by Frank Thomas. On May 12th at Wrigley Field, Burdette lost a 3–2 lead in the ninth inning when he served up a gopher ball to Walt Moryn. After loading the bases, Burdette fired what he thought was strike three to pinch hitter Earl Averill. His next pitch was grand slammed by Averill for a 7–3 Cubs win. On May 26th, in a singular performance, Harvey Haddix of the Pittsburgh Pirates pitched a perfect game against Milwaukee for 12 innings, only to lose in the 13th. Burdette was his opponent and went all 13 innings for his eighth win, scattering 12 hits.

On August 18, 1960, facing just 27 batters, Burdette pitched a 1–0 no-hitter against the Phillies. Tony Gonzalez, the only Phil to reach base, was hit by a Burdette pitch in the fifth inning but erased on a double play; Burdette also scored the only run of the game. On August 23rd, following up his no hitter, Burdette fired his third shutout in a row, pitching the Braves to a 7–0 win over the Dodgers. On August 27th, after pitching 32 2/3 innings without allowing a run, Burdette gave up a Felipe Alou home run as the San Francisco Giants defeated Milwaukee, 3–1. On September 6th, Pittsburgh's All-Star shortstop Dick Groat suffered a broken wrist when hit by a Burdette pitch. In 1961, Sammy White was catching for Milwaukee when Orlando Cepeda came to the plate (he led the league in homers and RBI that year). White went to the mound to consult with Burdette about how to pitch to Cepeda and they both agreed that whatever they had tried had been unsuccessful. White came up with the idea that they should tell Cepeda what was coming because "nothing else had worked". Burdette agreed. White crouched behind the plate and told Cepeda what was coming. Cepeda protested to the umpire that this was illegal and was told it was not. From that point on, in that game, White told Cepeda every pitch that he signaled to Burdette and he was retired easily each time.

On June 15, 1963, Lew was traded by the Braves to the St. Louis Cardinals for Gene Oliver and Bob Sadowski. On June 2, 1964 he was traded by the Cardinals to the Cubs for Glen Hobbie and, on May 30, 1965, he was purchased by the Phillies from the Cubs. Released by the Phillies on October 13, 1965, he was signed as a free agent with the California Angels on November 29th. On July 22, 1966, pitching in relief for the Angels, Burdette earned his 200th career victory. The Angels scored two runs in the top of the ninth to defeat the Yankees, 6-4. Burdette hurled the final two innings in Yankee Stadium, allowing just one hit. He played his final major league game on July 16th, 1967 at age 40 and, on September 23rd, he was released. He had earlier returned to the minors with the Seattle Angels of the Pacific Coast League to finish the season; he ended his baseball playing career at 40. He then was a scout for the southeastern area, Central Scouting Bureau (1968) and a coach for the Atlanta Braves (1972-1973), ending his involvement with baseball at 46. 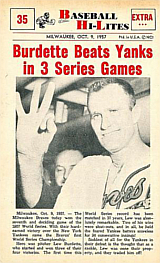 The hero of the 1957 World Series with three complete game victories for the Milwaukee Braves, Lew was a two-time 20-game winner and a National League All-Star twice. He threw a no-hitter against the Philadelphia Phillies on August 18, 1960, and was the winning pitcher against Harvey Haddix in the "greatest game ever lost".

Years before Mark Fidrych became famous for talking to the baseball, Burdette used similar antics to psych himself up on the mound. In the 1957 World Series, he shut out the New York Yankees twice in four days to give the Milwaukee Brewers their only World Championship. He was the first pitcher in 37 years to win three complete games in a single World Series and the first since Christy Mathewson (1905) to throw two shutouts in a single Series. The win gave Milwaukee the world championship and earned Burdette Series MVP honors.

Hall of Fame lefty Warren Spahn and right-hander Burdette gave the Braves a formidable one-two punch, with 443 victories between them in 13 seasons. Frequently accused of throwing a spitter, Burdette never bothered to refute that charge and used the paranoia to his advantage. His constant fidgeting on the mound fed that suspicion; it did not indicate nervousness. Besides winning 20 games in 1958 and 21 in 1959, Burdette won 19 twice and 18 once. His 2.70 ERA topped the National League in 1956. In two All-Star Games, he allowed only one run in seven innings.

Burdette had excellent control. Over a four-year stretch in which he averaged 20 wins and 280 innings per season, he walked a total of 156 batters, or 39 per year. His career average of 1.84 walks per nine innings pitched places him behind only Robin Roberts (1.73), Carl Hubbell (1.82) and Juan Marichal (1.82) among pitchers with at least 3,000 innings since 1920. On the other hand, in part because he pitched in Milwaukee most of his career, and in part because he was always around the plate, Burdette gave up his share of home runs. In 1959, he led the National League when he surrendered 38 homers.

After his baseball career was over, he became a public relations specialist for an Athens, GA cable television company. Burdette also cut a record in the 1950s entitled "Three Strikes and Then You're Out". He had brown hair and blue eyes, his ancestry was French-German and his principal hobbies were hunting and fishing. He died in 2007 of lung cancer at age 80. Burdette's grandson, Nolan Fontana, made his major league debut in 2017.