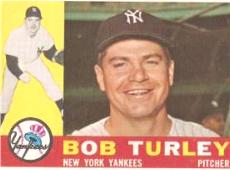 "I sat down with this eight-year-old perched on my knee and his mother took the picture. Now it's about 40 years later and here's Billy Crystal telling me, `Bob, that's my favorite picture. It's on my desk today.'" - Bob Turley, about being a Yankee hero to a child

Pitcher Bob Turley played 12 seasons in the major leagues and appeared in five World Series, winning four games in Series play. A big guy whose calling card was a blazing fastball, Turley won the 1958 Cy Young Award with the New York Yankees, and he had good records in a number of other seasons, going 17-13 in 1955, 8-4 in 1956, 13-6 in 1957 and 9-3 in 1960. "Bullet Bob" was often among the leaders in strikeouts per nine innings.

Turley also was good at figuring out what the opposing pitcher was going to throw. He would tip off his teammates at bat by whistles. Mickey Mantle and Gil McDougald were especially interested in getting the secret messages.

He struck out 22 in a 16-inning Texas League game in 1951. It is the Texas League record; the nine-inning record is held by Dave Righetti. He missed the next year due to military service. He began his major league career with the St. Louis Browns in 1951 and moved with the team to Baltimore, MD in 1954, when they became the Baltimore Orioles. He won the team's home opener that year, defeating the Chicago White Sox, 3-1, at Memorial Stadium. After the season, he was traded to the New York Yankees in what is the largest trade in major league history, involving 17 players.

Turley was the first pitcher from the American League to win the Cy Young Award, with the Yankees in 1958. He was also the World Series Most Valuable Player that year.

Turley settled down in Lutherville, MD, near Baltimore, during his only season with the Orioles, and never moved even though his stay with the Orioles was short-lived. After baseball he sold mutual funds and insurance, partnering with former major league catcher Gus Triandos, operating a bowling alley and was a co-founder of Primerica. A distant relative, Nik Turley, also pitched professionally. He died of liver cancer at age 82 in 2013.