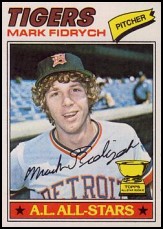 "Man, I loved Mark. . . I hung out with him whenever I could, because you knew you were with a guy who was genuine and real. That was the Bird: genuine and real." - teammate Ron LeFlore, quoted in Sports Illustrated in April 2009 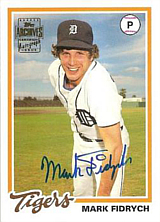 Nicknamed "The Bird" because of his resemblance to the Sesame Street character "Big Bird", pitcher Mark Fidrych was one of baseball's all-time greatest quirky characters. His idiosyncrasies included talking to the ball, shaking the hands of his infielders after a good play, and patting the mound to smooth it out.

Fidrych was signed by the Detroit Tigers and scout Joe Cusick as a 10th round pick in the 1974 amateur draft out of high school. At the age of 21, Fidrych made the Tigers out of spring training in 1976. After seeing very limited action as a reliever in the early part of the season (1 inning of work in the first six weeks), Fidrych was given a spot start on May 15th, which he won. After one more spot start in late May, he was added to the rotation on May 31st. He proceeded to reel off a string of complete-game victories, and his dominating performance and colorful mound antics made him an instant national star (and 1976 All-Star) on a mediocre fifth-place Tigers squad. His celebrity status, in fact, transcended the world of baseball; he was an eminently quotable character to whom the national media took an instant shine. As an example of his appeal, Fidrych was the first athlete to make the cover of Rolling Stone.

Within the world of baseball, and especially in Detroit, in 1976, Fidrych was a star of massive proportions. His 18 home starts (out of 81 home games) accounted for half of Detroit's attendance figure that year, and he was a popular draw on the road too. Statistically, he was also a marvel: in essentially two-thirds of a season, Fidrych pitched 250 innings and won 19 games with the sub-.500 Detroit Tigers, was the American League Rookie of the Year and the runner-up for the Cy Young Award. He also led the league in ERA, and in complete games with 24.

However, Fidrych's time at the top of the game was short as he was plagued with arm injuries. Tigers manager Ralph Houk later received intense criticism for likely causing or adding to these arm troubles, by allowing the 21-year-old rookie to pitch so many innings, often on only three days' rest. This was an especially galling waste of future potential when it is taken into account that the 1976 Tigers were nowhere near playoff contention, and while the fans wanted to see Fidrych as much as possible, Houk had no need to press Fidrych as hard as he did.

In 1977, Fidrych was limited to 11 starts after tearing cartilage in his knee in spring training. He returned to the big leagues on May 27th, and amazingly, Houk again kept him on the mound for as long as possible in each game - Fidrych completed 7 of his first 8 starts. In his ninth start (a game against the Baltimore Orioles), Fidrych felt his arm "go dead". He was roughed up for 6 runs in 5 2/3 innings in that start, and for another 6 again over 5 2/3 innings in his next start. In the following game against the Toronto Blue Jays, Fidrych left after two-thirds of an inning due to arm problems, and he did not return to the Tigers that year.

It was ultimately discovered that Fidrych had torn his rotator cuff, but this would not be diagnosed until the mid-1980s, after his baseball career was long over. Pitching with the tear, Fidrych kept plugging away at restarting his career, appearing in only 16 games the next three seasons (all with Detroit). His last major league appearance came against the Blue Jays in Toronto on October 1, 1980. Released by Detroit at the end of 1981, Fidrych signed with the Boston Red Sox in 1982, but did not make it back to the majors.

After his playing days he went back to being a farmer, although he also later appeared in Neil Simon's 1985 movie, The Slugger's Wife. On April 13, 2009, Fidrych was found dead beneath a pickup truck he had been apparently working on at his farm in Massachusetts. The medical investigation found that Fidrych suffocated when his clothing became tangled in the truck's power takeoff shaft. In 2012, it was announced that his family was filing a wrongful death lawsuit against the Mack Truck corporation and the dealer who had sold him the truck, claiming that the vehicle was in a "dangerous and defective condition" when sold. The suit was dismissed by a Massachusetts appeals court in November 2017.