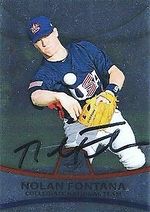 Second baseman Nolan Fontana began playing in the Houston Astros minor league system in 2012. He was taken by the club as its first pick in the 2nd round of the 2012 amateur draft.

On November 22, 2016, Nolan was claimed off waivers from Houston by the Los Angeles Angels of Anaheim. The Astros were faced with a numbers crunch because of their very productive farm system and had to get rid of some former top prospects who had not yet panned out in order to clear room for other youngsters on their 40-man roster. Jonathan Singleton was another player who was lost by Houston in similar circumstances that day. The change of organizations opened up an opportunity for Nolan to reach the majors, which occurred on May 22, 2017, when a struggling C.J. Cron was demoted to the minors. He made his major league debut starting at second against the Tampa Bay Rays on the day of his call-up and went 0 for 3 with a strikeout and a caught stealing.

He is the grandson of Lew Burdette.