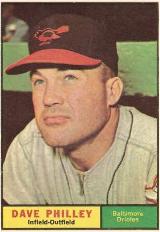 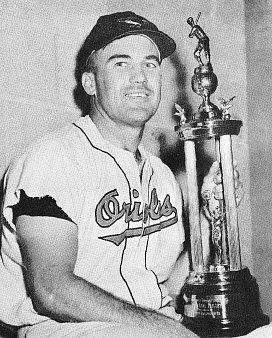 As evidenced by his lengthy 18-year career which ended at age 42, Dave Philley was a solid major league ballplayer who wasn't great in any one category (except pinch-hitting) - but very good in most. He was regarded as a solid hitter with some speed, while defensively, he had a good throwing arm. For the last five years of his career, he had no peer as a pinch hitter, and he is still considered one of the greatest pinch-hitters of all-time.

As a boy, Philley became a switch hitter after breaking his arm. He began his pro career in 1940 as 20-year-old with the Marshall Tigers. When he hit .341 for two clubs the following year, he got a shot in the majors in September, appearing in 7 games for the Chicago White Sox. He was back in the minors with the St. Paul Saints for part of the 1942 campaign before joining the army. He then missed the next three years while serving during World War II.

Philley came back after the war and spent most of 1946 in the minors with the Milwaukee Brewers, hitting .329 with 13 home runs before earning another late-season call-up with the White Sox (and hitting .353/.389/.471). He became Chicago's regular left fielder in 1947, a role he held for the next four years. Early in the 1951 season, he was traded to the Philadelphia Athletics along with Gus Zernial as part of a three-team, seven-player deal that brought Minnie Minoso to the Sox.

Philley spent three years with the A's and had the best season of his career in 1953, hitting .303 with a career-high 30 doubles. However, early in 1954, he was dealt to the Cleveland Indians for Bill Upton and Lee Wheat. He struggled that year for the Tribe, batting just .226 and going 1-for-8 in the World Series as Cleveland fell to the New York Giants. Over the next three summers, he played for four different clubs: the Indians, the Baltimore Orioles, the White Sox again, and the Detroit Tigers. By the end of 1957 he had played for five of the eight American League teams (but never in the National League up to that point).

Philley returned to Philadelphia at age 38 in 1958, playing in the NL for the first time with the Philadelphia Phillies. He hit .309 in his first year with the club and ended the season by setting a record with 8 consecutive pinch hits. He added one more on Opening Day 1959 to put the mark at 9, and he went on to hit .291 that year. He moved on to the San Francisco Giants in mid-1960 and then went back to the Orioles later that year. With Baltimore in 1961, he set a record with 24 pinch-hits; the major league record was since broken by Jose Morales and later John Vander Wal and now stands at 28, but Philley still holds the AL mark. He closed out his big league career in 1962 with the Boston Red Sox, twenty-one years after breaking into the majors.

Immediately after retiring, Philley tried his hand at managing. He was with the Modesto Colts in 1963, the Statesville Colts for part of 1964 (before Rudy York took over), the Cocoa Colts later in 1964, and the Durham Bulls in 1965. Leaving the Houston Astros' organization, he managed one year in the Red Sox chain with the Waterloo Hawks.