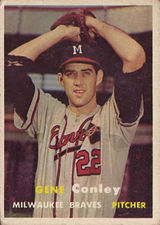 "When I look back, I don't know how I did it, I really don't... I think I was having so much fun that it kept me going. I can't remember a teammate I didn't enjoy." - Gene Conley, to the Los Angeles Times, 2008

Gene Conley is the only man to win both a World Series title, in 1957 with the Milwaukee Braves, and an NBA title, winning three in a row with the Boston Celtics in 1959, 1960, and 1961, while also pitching for the Boston Red Sox in 1961. In eleven big league seasons, Gene won 91 games.

Conley was the first man to win the Sporting News Minor League Player of the Year award twice, doing so in 1951 with the Hartford Chiefs of the Eastern League and in 1953 with the Toledo Mud Hens of the American Association. Three decades later, Sandy Alomar Jr. won the award in 1988 and 1989 to become the second player, though he split in 1988 with Gary Sheffield.

Gene made his big league debuts in Boston, with the Celtics and Boston Braves, in 1952. In baseball, he did not return until 1954 with a 14-9, 2.96 record in 28 games and an All-Star appearance. He finished third in Rookie of the Year voting, behind Wally Moon and Ernie Banks but ahead of teammate (and future home run champion) Hank Aaron. It was back to the All-Star Game in 1955, where he picked up the game's victory, finishing the year 11-7, 4.16 in 22 games. Gene was a valuable contributor to the 1957 world champion squad, with a 9-9, 3.16 record as a swingman. He picked up basketball again in 1958, a season in which he was 0-6, 4.88 on the mound, and delayed his arrival at training camp for the Celtics playoff push.

This choice led to Gene's move to the Philadelphia Phillies before the start of the 1959 season in a six-player swap. Gene won his first NBA ring and was named to both All-Star Games played that year in finishing 12-7, 3.00 in 25 games. After the 1960 season, he was moved to the Boston Red Sox, playing sports for the city's two prized franchises almost simultaneously. His last strong season was 1962, a 15-14, 3.95 line in a career-best 241 2/3 innings, retiring after a rough 9 starts in 1963. He was a teammate of Hank Aaron, Warren Spahn, Eddie Mathews, Richie Ashburn, Robin Roberts, Sparky Anderson and Carl Yastrzemski in baseball, and Bob Cousy, Bill Russell and Bill Sharman in basketball.

Gene has the second most major league victories of any pitcher out of Washington State University, trailing only Aaron Sele. He was the last surviving player to have played with both the Boston Braves and Boston Red Sox when he died in 2017 of congestive heart failure.